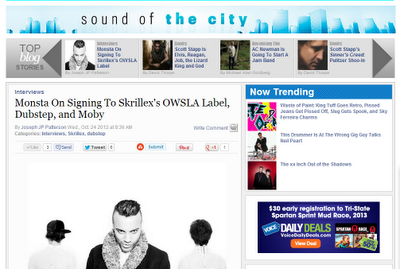 Skrillex may be "the most hated man in dubstep," but his new signing will soon make that a thing of the past. Having discovered Monsta through his manager during SXSW, Skrillex was in a state of shock when he found out that the voice on one of their tracks wasn't an Aretha Franklin sample. It was, in fact, the powerful, soulful lungs of Skaar, Monsta's frontman. A few months after hearing their unique take on dubstep, Skaar and his two producer bandmates -- Rufio and Rocky, previously known as Pegasus -- were signed to the Grammy-winning star's record label, OWSLA.

The trio from London hit the critical bass music scene hard when they released Holdin' On a few months back. But in a good way. The synthy, melodic anthem quickly took over club land, as well as the airwaves -- with well-known tastemakers like BBC Radio 1's Zane Lowe heavily supporting the track -- but now they need to prove that they're no one-hit wonder. We spoke with Monsta recently, who released their Monsta EP yesterday and start an 11-date tour across the States on November 7. It touches down at Webster Hall on November 16.

Holdin' On was a pretty big deal in dubstep over the summer, and it's still doing its thing in the clubs and on the radio. How has the whole experience been for you guys?

Rocky: It's been amazing! It still is. We're really grateful for all of the support that we've had for the band and the EP.

Skaar: Now we just want to write more and tour more. We're on the Hadouken tour at the moment, and then the OWSLA tour in November.

Rufio: Yeah, we'd really like to play out as much as possible and get our music out there more.

Critics have compared your sound to the likes of Flux Pavillion and, more randomly, Moby. But, how would you personally describe your sound?

Rufio: We find it very hard to describe our music, as we don't think about what we're doing too much when we write together.

Skaar: It definitely comes from a soulful place, though.

Rocky: Yeah, and we like music that goes somewhere, becomes epic and has an intensity or heaviness to it.

Taking it back a little, which artists would you say had a helping hand in the music that you create today?

Rufio: We've all been influenced by a very wide variety of music. Growing up, we listened to loads of soul, blues and jazz: Sam Cooke, Steely Dan, Chick Corea, etc. It's a real mixed bag, which helps us to really understand the sounds that we want to make.

Skaar: Otis Reading is one of my biggest idols. He's timeless!

Rocky: In recent years, electronic music has been a massive inspiration. Everyone from Daft Punk to Justice, Boys Noize and Skrillex, they've all inspired us.

Speaking of Skrillex, how did your track end up in his hands, and how did it feel when he offered you a deal on his OWSLA record label?

Rufio: It came through a guy we know called Dave Rene, who we'd done some remixes for, and he played one of our tracks to Skrillex's manager, Tim. It all happened back in the summer, while they were out at SXSW.

Rocky: We were massively excited when they got in touch, as we're huge fans of his. All of the artists on OWSLA are strong, and just the general vibe of the label is great.

Skaar: Yeah, we feel really privileged to be a part of it and can't wait to go on the upcoming US OWSLA tour in November.

Your first release on OWSLA is the Monsta EP, right? Tell us a bit about what you've got on there.

Rocky: Well, there are three original tracks, along with three unreal remixes. The remix package had to be huge.

Rufio: It's our first EP, so it's an introduction to our sound and all the things that inspire us. We want people to be intrigued and want to hear more.

Skaar: It's a statement of intent. It's an important body of work for us, as a group.

Aside from the exciting new EP, what else do you have coming up that dubstep heads should be getting excited about?

Rufio: Well, we're currently touring the UK and we're coming out to the States to join the OWSLA tour, which we can't wait for! 22 cities across the UK and Canada.

Rocky: Yeah, it's going to be great to play loads of different cities with loads of different artists. We're still learning as we go, and there's no better way to learn than to watch and understand how some of these acts hone their craft.