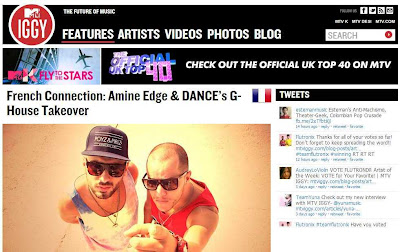 French Connection stores, beret hats, snail cuisine—France is famous for a lot of things. But soon and very soon, the EU state will also be known for pumping out the most exciting sound to invade dance music since instrumental trap. G-House, or "gangsta house," is a term that was coined two years ago by the Marseille production duo, Amine Edge & DANCE—a concept that has allowed them to bring their love of deep, dark, bass-ridden house together with hip-hop. From Miami ravers to London shufflers, their cuts—such as the Biggie Smalls-sampling Going To Heaven With The Goodie-Goodies and Lil Kim-inspired Bitches In The Project—may have already found a place in the heart of the underground house scene, but these musical brothers are only just getting started. Here's Amine Edge to give us the lowdown.

So, how did you and DANCE meet each other? At first, I thought you were brothers [laughs].

[Laughs] We’re very much like brothers now, you’re right. It’s much deeper than just music. We met each other ten years ago through one of our close friends, and we’ve been best friends ever since.

Individually, you both have big followings: you for your bass-driven house productions, and DANCE for his hip-hop beats. What made you decide to join forces?

We didn’t decide on anything, it just happened naturally. I used to make progressive house and, when I started to make deep house, DANCE was starting to make beats for established rappers in France. One day, we made two tracks together – just for fun: Keep Me On My Feet, which came out on Nurvous Records, and Going To Heaven With The Goodie-Goodies, which was released on 2DIY4. We really loved mashing our influences together, so we just carried on.

Out of all your releases, which one would you say has had the biggest impact so far? Going To Heaven With The Goodie-Goodies is my personal fave.

That one, most definitely! We believe our next tracks, Halfway Crooks and Bitches In The Project, will probably do similar things for us this summer also. I think my edit of Nina Kraviz’s Ghetto Kraviz had a big impact too, as well as Pop 60. We work very hard on everything, to be honest. We also make sure that we always post our sets on SoundCloud, because it’s the best promo ever. I love the fact that promoters can listen to what you do in real time. When we play out, we think about the crowd in front of us but we also think about the people who aren’t able to party with us, so that’s why SoundCloud is important for us.

G-House (gangsta house) is what you call your style of music, which I think is a great fit. The sound's really taken off, especially in London's underground house scene, but how did you initially come up with the concept?

We’re both kids from immigrant families living in France, and we came up in the streets. We love hip-hop and slang language and so it just came out of a personal joke between us, like, 'This shit is so gangsta. Listen to that fucking hairy bass, bitch! This shit is not deep house, it’s gangsta house! Do you see this gun coming out from the speakers?' Now it’s a big part of our lives. We ended up calling it gangsta house because it sounded fun and new, and people seem to love it. It doesn’t mean we’re gangsta, though. Gangstas don’t make music. Or, do they? [Laughs]

I don’t know, to be honest. We live in Marseille, and we produce music every single day when we’re there. Most of the time, we're out of the country touring. In our city, there aren’t many places to party. Clubs like Spartacus Club put on good line-ups every weekend, and they fight hard to stay up in the game in the underground. There’s a very good scene in Paris though, with clubs like Rex and Showcase and underground parties like Concrete and Follow The White Rabbit. Big up those fighting for the cause!

You guys have been touring around the world like mad, recently. What country has been the best to play at so far, though? Your set at Magna Carta in London a few months back was epic!

Yeah, Magna Carta was sick! Big up to Joe. That was one of the best events we’ve played at, but my all-time favourite has to be Warung in Brazil – it’s the best club in the world! Just ask Kolombo, Richie Hawtin, Magda, Solomun or Maceo Plex, I’m sure they'll agree with me.

Speaking of London, there’s currently a war on the dancefloors with the fist-pumpers throwing shots at the house newbies and their foot shuffling. There were plenty of shufflers at the Magna Carta event, so, what's your thoughts on the whole thing?

Actually, I’m a big fan of shuffling. I’m a big fan of the arts, and dance is an art. I love the way they move, and their facial expressions are just awesome! Ghetto as hell and funky at the same time. I support it, definitely. I have nothing against this dance or any other dance, for that matter. Just shut the fuck up and dance, bitch! [Laughs] We always get a big welcome when we’re in London. People love us there, and the feeling is very mutual. They just understand everything. I think London is the leader of many, many things: fashion, music, dance, etc. The clubbing culture there is probably the biggest in the world, too. They live to party: They eat party, they sleep party, it’s just all about the party!

You’re not wrong there! Alright, so what can fans look forward to from Amine Edge & DANCE in coming months?

Okay, so this summer we have the following tracks coming out: Bitches In The Project, Mistakes, Halfway Crooks, and My Girl. And then there’s the tracks we’ve remixed, like Kenneth Bager Experience’s Follow The Beat on FFRR, AFFKT & Los Suruba’s The Goonies on Suruba, Star Slinger & Teki Latex’s Ladies In The Back on Jet Jam, and Aura Dione & Da French Connexion’s Breathe. We’re also working on projects with Subtron & The Midnight Perverts, Adana Twins & Monte, Wildkats, La Dame Noir, Neim, Jesse Perez, Carrie Golden, StikkyLips, Tough Love, Eats Everything, MK, Navid Izadi, SerGy, my label – CUFF – and many others. Stay tuned.