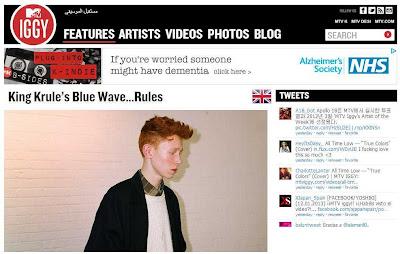 Archy Marshall, once known as Zoo Kid and who now rolls as King Krule, is one of London's promising young talents. He's been on the one-to-watch radar since 2010, but trust and believe when we tell you that 2013 will be the year for the ginger-haired alt-indie kid to really rule. At 18 years of age, King Krule holds a sound mature beyond his years, but his lyrics will take you to an often troubled place in his young mind – a place most people from less-than-privileged backgrounds have visited one time or another in life.

As a child, the graffiti-lover recalls his mother playing garage, reggae, and hip-hop music in the family home – where she would often hold parties – instilling great music taste in him from the get-go. And while the aggressive, moodiness of grime and dubstep music left a mark on Krule musically during his younger Rinse FM-loving teenage years, it was coming across songs on the net by the likes of Fela Kuti, Gang Starr, and Chet Baker that helped with his musical growth.

Singing and writing from the age of eight, the singer-songwriter hadn't had a music lesson until he reached The BRIT School gates in 2008, where he stayed until 2011. King Krule's time at the reputable establishment was rocky, to say the least, but he clearly paid attention in the classes on refining one's sound to become an A+ musician. MTV IGGY speaks with the BBC Sound Of 2013 nominee.

The elusive King Krule! How are you?

You were once called Zoo Kid, right? Tell me how you came up with your interesting aliases, and the reasons for changing from one to another…

I changed from Zoo Kid to King Krule mainly because I didn’t want to be called a 'Kid' when I was 20, so I just thought I’d get rid of that alias and change it now while I’m younger. I wanted to change it quick and King Krule was the first thing that came into my head. I got into a lot of Anglo-Saxon king history, and I also like the film King Creole – which is an Elvis film. Then there’s the band Kid Creole, who I’m a fan of, so there’s a few references in there, but I really just wanted to make up a word and start a new thing.

I’d say it’s mainly influenced by hip-hop, but hip-hop obviously takes in a lot of genres, samples them and comes out with this quite straightforward beat that’s quite primal in a way. So I guess it’s quite a primal form of music and it’s all of my influences put into a pot, and what I’ve come out with after listening to all these things. [Laughs] It’s funny, I created the ‘blue wave’ term way back in 2008! Blue wave is probably the best way to describe it, because the music’s blue and it sort of rides on a wave [laughs].

[Laughs] I love that! In your lyrics, it’s clear that you’re very in touch with what’s going on in your surroundings. How has living in London – south east London, especially – inspired your songwriting?

Very much so because, obviously, it's my surroundings so being submerged in it has been very influential. But I do try and break away from being the London stereotype because I think there's been too many of them, especially in the past five years. I've got a lot of influence from the area, and I’ve seen a lot of things and written about a lot of things that have happened, but I try and steer away from being this south London boy [laughs].

It’s worked for you so far, so can’t be all bad! As an aspiring musician, which other musicians did/do you look up to?

I like what Robert Glasper is doing at the moment, a lot! Erykah Badu and that whole scene has influenced me quite recently, more-so. Because the internet’s there, I have access to a lot of the legends, like Fela Kuti. I used to watch a lot of Fela Kuti videos, just to see how he performed. He inspired me a lot, actually, because he was a man of many words, many good words.

And who would you like to collaborate with? Can we expect to hear you singing your heart out on a Disclosure or SBTRKT production down the line?

[Laughs] I’ve actually been working with Mount Kimbie a lot recently, I’ve wanted to work with them for a long time. I just think their electronic music has a nice and very ambient sound, which is very influential to my own music. It was definitely good to work with them. I kind of want to work with RATKING as well, because they’ve got a really good vibe.

Is it true that you used to bunk lessons when you attended The BRIT School? Something tells me that your time spent there wasn’t as pleasant as it was for other former students [laughs]…

[Laughs] It was a really good school, but I came from a really different background – in terms of schooling. I wasn’t used to there being no fights in the playground or anything like that [Laughs]. It was a strange environment. I got excluded a few times, but I got through it. It was probably the best form of education I’ve had. So, my time there wasn’t as bad as some people think.

You come across as someone who isn’t in this music thing for the money and fame. To me, you seem like you’re all about getting your message across through your music. Would I be right in thinking this, or are you hoping to bag yourself a wag and settle down in an LA mansion [laughs]?

[Laughs] Of course, man! I’m gonna get all of that, but in time. This is just the image I’m running with at the moment [laughs].

[Laughs] Go for it, man! Okay, so what’s the deal with you and Rinse FM? It shocked a few people when your Rock Bottom video was uploaded through their YouTube account…

Going back to that thing about south London, I used to listen to Rinse FM quite a lot when I was younger so it’s always been a sort of dream to see what’s behind there. Recently, I’ve been able to go to their studios and it’s interesting to me, because I used to listen to the station when it was just known as a pirate, but now it’s a label and they can release my records. Good connections, good connections.

You’ve been a 'one to watch' forever – well, ever since you released Out Getting Ribs in 2010 – and you only turned 18 the other day. Things are heating up a bit more these days, though, as you’re receiving more kudos by the day for your unique style of music. Are you ready for what’s to come?

Yeah, most definitely! I mean, the prep was mainly to get my repertoire of songs fully down and ready to release, because I’ve been working on them for so long now. Being younger, there was always a stigma with my live gigs and stuff – I was always a bit shy when it came to performing – so I guess these few years have prepared me for getting out there a bit more now. I’m currently working on my new album, which is going to be called Six Feet Beneath The Moon. There are no collaborations on the album, it’s just all me. I guess it’s quite a personal and self-indulgent record. There’s going to be a bit of everything on there: songs about relationships with people, songs about me trying to find myself more… To be honest, I don’t really know what to expect. I’ll just have to wait and see!