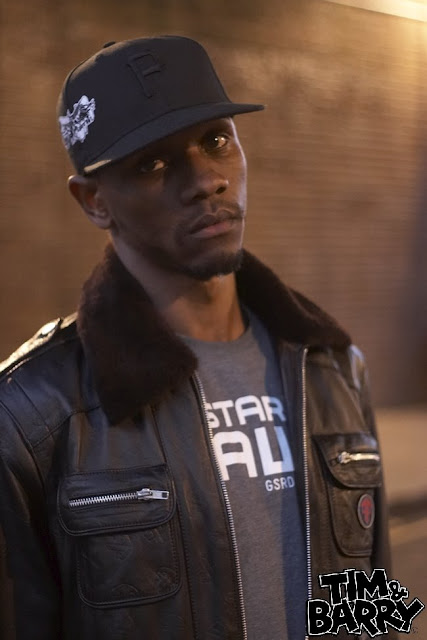 Giggs' gritty take on hip-hop has turned him into a UK hood star, pretty much overnight. I first came across the Peckham, South London rapper when he featured on OTB and SN1's 'Up In The Shoobz', and I've seen his star rapidly rise ever since. With Giggs' 'Spare No One' freestyle racking up over 300,000 views on YouTube in just a week, a barrage of live bookings up and down the country, and his Ard Bodied mixtape getting reloaded in every tinted whip across the land, it seems fans can't get enough of Hollowman.

Throughout his mixtapes, you get to hear a raw and honest account of what it's like to live in Giggs' shoes: daily struggles, street life, and stressful issues concerning the opposite sex. Although some may consider his music "too road" (whatever that means), Giggs remains true to himself by putting a unique spin on what goes on in his surroundings through rap, while his monotone flow and catchy ad-libs make him all the more appealing. In his first ever interview, SUPERSUPER Magazine finds out who Giggs really is...

Let's take it back a bit: when did you start rapping?

Why do you think everyone's rating you so much at the moment?

I'm not even sure, man. It's probably because I rap about what everyone's going through. Just say like your upset about something and then you listen to my music, I will show you that I'm kind of going through the same thing and so is probably everyone else on the reality side of things. Basically, in a nut shell, I'm just spitting some real shit.

What would you say to the ignorant folk out there who, perhaps, feel that your lyrics glamorise gangsterism?

Ahhh! They need to wake up and smell the coffee, man (laughs). Really and truly, these things are happening out here and I'm just trying to explain it in a nice way, you get me?

I do. I do. So, there's a rumour going around that you've been signed to Kano's record label. Can you confirm or deny that for us?

I don't even know Kano, man [laughs]. I didn't know there was a rumour like that because no one in the hood knows about what's going on in the industry or grime artists and that, so I don't hear about them things myself. You're one of the first people to tell me that.

I don't even listen to grime. I listen to Ghetto and that's about it. I'm more of a rap person, grime is too fast for me [laughs]. Most of the MCs just say the same things over and over - some joke thing! One or two man spit properly. Skepta is alright... You know what it is? Little youths arguing, I cant take it seriously because man don't argue without repercussions, you know them ones there? [Laughs] When I hear them cussing each other's mothers, I just don't understand it. I rap about pain and that's why I don't do diss tracks and all them things, I don't call other artists name because that's a whole different kettle of fish.

[Laughs] I hear that! On a different note, do you intend on getting a major record label deal in the near future?

Yeah, I would like to get a deal, but not some shit UK deal with them talking about £70,000. I'm looking millions! Even a half would do me (laughs). I'm sure I can make all that money myself, though. I just hope people buy and support the album. Man dem don't want to buy CDs, they'd rather download it, or something (laughs). I just hope people support it.

What do you think of the whole UK rap movement right now?

Yeah, the underground scene is hard! There are a lot of rappers out there who are sick, from all corners. You've got Young Spray from north London, Mashtown from east London, and there are heavy youngers in Peckham, too. There are talented rappers out there, people just need to take note and start listening.

Moving forward, what can people expect from your Walk In Da Park album?

It's just some real shit on CD, you get me? Bits and pieces of my life. I twisted it up a bit because it's not about baiting up anything (laughs). A few tunes for the ladies, a few tunes for the man dem - positive and negative. You know what it is? People can say it's all negative but life is messed up, fam, and me telling people what's really going on isn't going to change anything or make anything worse or better out there -- most of them people saying we're influencing the youngers don't know how it is out here. What would they prefer me to do? Write down about what pisses me off or go or buy a strap and start spraying? [Laughs] Like, people want me to do that without them understanding what's going on.

I didn't think of it like that, but it is true... Plans for the future?

I just want to carry on with my music and make it good for the hood, because there is mad talent in the hood: rappers, graphic designers, you've got your comedians as well. I just want to do my thing and bring the hood with me.

Walk In Da Park is out now.
www.myspace.com/trapstargiggs

A version of this appears in SUPERSUPER Issue 14
Posted by Joseph 'JP' Patterson at Friday, September 05, 2008