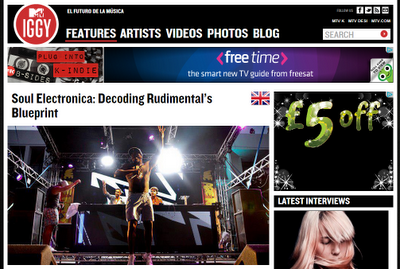 Amir Amor, Kesi Dryden, Piers Agget and DJ Locksmith are the four members who piece Rudimental together, East London's latest chart-topping export. The music producers who're "on a mission to bring back soul into electronic music" first made waves when they released Spoons via Black Butter Records earlier this year. Featuring the silky-smooth vocals of Syron and MNEK, Spoons quickly became a hit with club-goers – and gaining fans in the likes of Pete Tong, The xx, Disclosure and Annie Mac along the way. But their major label-released collaboration with John Newman, Feel The Love, would eventually catapult them into the limelight; it went on to spend several weeks at No. 1 in the singles chart. Before their arrival, many likened Rudimental to D&B dons Chase & Status, however they're the ones setting the blueprint now. MTV IGGY caught up with Amir Amor to find out how he and the other three members are coping with their new-found fame.

Firstly, congratulations on all of your success so far. How did it feel when you went straight in at number one in the UK singles chart with Feel The Love earlier this year?

Thanks, man. Yeah, it was crazy! It was pretty nuts, because we had that song done for a little while. We put out Spoons first and didn't have any inclination that it would even pick up any pace, but people started picking that track up, such as yourself, and DJ Target – who was one of the first people I gave it to. Spoons kind of paved the way for Feel The Love, but we still didn't expect it to do as well as it did. When it came out and went straight to number one, it was an insane moment for everyone. Half unexpected and, at the same time, it kinda felt right for that track because it was a big track when we made it.

John Newman’s vocal on that track is next level! He has one of those timeless voices, the type of voice that sticks in your head for days on end. Where did you find him?

Piers used to play in a band with John before Rudimental. He used to play organ. Piers met John in a pub when he was singing. We'd already written Feel The Love at the time and Kesi was singing the vocals, but when we found John and heard his voice, we thought he was perfect for the track. So we got him out of the pub, on the track and it went from there [laughs].

Going back to Spoons for a moment, did you ever imagine it would be as popular as it was/still is? I still listen to it on a daily basis [laughs].

In Australia, it seems like it's just picked up now! When I was out there, they kept on calling it the second single [laughs]. On the radio stations out there, they're still playing it quite a lot. I remember when we made that track, I was eating my lunch in the studio and made the percussion part of that track with a spoon and fork [laughs]. MNEK, who’s part of our family and shares our studio with us, came in and, within ten minutes, he started humming this vocal line and lyric idea so we kinda put that down and it all came together. We finished it that day and put it out on SoundCloud the following day, so we didn't even approach it as, 'Let’s do a single.' But we eventually put it out and filmed the video on an SLR camera at our friend’s house with Syron and MNEK. It was one of those things where it was just sitting online and it’s just grown and grown over a period of time. It feels like a slow burner, and I think it still has a way to go.

Spoons is a deep house track, you’ve made garage and dubstep in the past, and you’re currently making, like, soulful D&B. If you had to put yourselves under one specific genre, what would it be? Better still, does it even matter?

I come from a garage and hip-hop background, that’s kind of my sound, and I always looked at Spoons as a garage/house kind of track. DJ Locksmith actually comes from a house background. I play guitar, too, and I used to do Marvin Gaye covers back in the day, so I love my soul music. Piers is also into his soulful music, but he was also a relatively well-known grime producer in east London a few years back, and Kesi's loves hip-hop music. So, when we get together, we don't think like, 'Let’s make a D&B record.' Feel The Love ended up at that tempo because when Kesi first put the idea together, that's the tempo he just sort of put down. I think it was based more on his mood, than purposely setting out to make a drum & bass beat.

That kinda goes for all of our tracks. With Not Giving In, which is our new single, the tempo is 159 – which, for a D&B track, is very slow – so it’s not even necessarily considered D&B by proper D&B heads. We're not really from that scene. In terms of tempo and genres on the album, it varies, but the unifying thing is the soulful side of it. We're really into soulful vocals and that carries on throughout. We write the song first and then make the beat. If it works well with a garage beat, we'll go with that, etc.

Not Giving In features John Newman again, but you also called on Alex Clare to sing a few notes, too. Your songs always have deep messages behind them, so what's the story behind this one?

Not Giving In was written about a good mate of ours, who was going through a tough time, so the lyrics are really based on their struggle. The beat came about when we got together with Mark Crown, our trumpet player. I think with this single, what we want to show is that we've got some depth. The aim is to show people that we're not just producers, but we're also musicians and songwriters, too.

You’ve done a pretty good job so far. Much like the video for Feel The Love, Not Giving In is another work of visual art. Are music videos an important part of what you’re about?

Most definitely! When I watch a video, it's like the glue that puts the song together. The videos almost make sense of the songs, in a way. With our videos, we like to include the things that we're about. Things like positivity in dark times, which is a theme that runs through both videos. All of us used to work with kids in east London who had behavioural issues. I used to teach music production to kids in a youth club, so for us having the kids in the Feel The Love and Not Giving In videos, we could relate to that. We also wanted to show a different part of reality, the realness thing is a big point in our videos. We didn’t want anything too glamorous; we wanted it to feel real.

And that definitely comes across in both videos. On the subject of glamour, how are you coping with all of the instant fame and being so in-demand? [Laughs]

I deserve it, man [laughs]. I've been in the studio for five years and I'm suddenly seeing daylight now. The way everything has gone now is absolutely insane! We played Creamfields with 15,000 people singing the lyrics to our song – it was next level. Playing out has definitely become one of the most fun parts of it. We've only really done Hackney and Isle of Wight live, though. Most of our shows have been DJ sets, but it’s all about the live stuff next year – which I’m really looking forward to. Being in the studio is one thing, but the live side is what we’re really all about.

You've been compared to Chase & Status quite a lot. I’ll put my hands up, because I’m also guilty of comparing the two groups when you first came out. Sorry [laughs]. I'd love to know your thoughts on the whole thing...

[Laughs] It’s cool. It's flattering, really, because they’re sick. Their music is wicked! We DJ some of their tracks when we play out, but we're not like Chase & Status. We come from a live music background and that's not necessarily what they were. When we start getting deeper into the rest of Rudimental, and release the third single and album, then people will stop making those comparisons because we're almost completely different – especially on the live side of things.

I don’t think I’m alone when I say that I’m really excited to hear your debut album. What can people expect from it, and can you tell us any names of the artists who will be featuring on it?

It'll be out in February of next year. Most of the artists we're working with on the album are currently unknown. Where we're based in this studio in east London, MNEK, John Newman, Syron and other singers have been coming through for a while. We're developing a lot of artists for our records so, in terms of names, there's not that many that people would have heard of, other than Alex Clare. I perhaps shouldn't mention the other names until we get the full paperwork done [laughs]. Oh, we've done some tracks with Angel Haze! We actually did four potential tracks together: one for us, one for her and two which are, as yet, unfinished. In terms of other names, we've got Sinead Harnett on it as well. There's going to be a lot of new singers on the album who, in a few years, are going to be doing big things. In a way, we've been A&Ring for a while, trying to find the best soulful voices for electronic music.

Cool! So, where do you see Rudimental in the next three to five years?

It's funny, because I remember sitting down before we put Spoons out and actually thought about the question you just asked. We want to play Glastonbury’s main stage, that would be amazing! We want to be a massive, worldwide band. Hopefully the album is going to be one of those classical albums like Mezzanine by Massive Attack, or one by Soul II Soul. We want to be one of these groups who go on to be international, play huge gigs and make classic albums. We want to be a group who’s hard to define, genre-wise, but when you see them live, you totally get it.