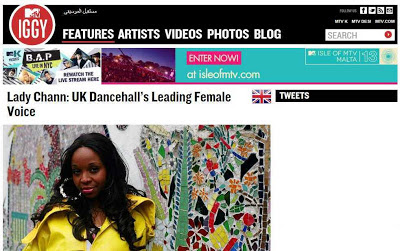 Lady Chann is taking the world of dancehall by storm. From Suncycle Crew days to her recent Dun Dem trilogy releases, she has become a force to be reckoned with. The female deejay first reached widespread recognition when she recorded her own version of Beenie Man’s HMM HMM in 2006. The track took off in bashment halls up and down the UK, and was soon picked up by Choice FM DJ, Masterstepz. It quickly became a hit with listeners of national and local radio stations, which resulted in a meeting with Beenie himself – who she later performed with at Stratford Rex in east London. Lady Chann has since grown into her own as a solo dancehall artist, releasing classics like 2009′s Your Eye Too Fast, 2010′s Sticky Situation and, more recently, Feel Calm. Championed by big-name DJs such as Toddla T and The Heatwave, Chann is the leading Lady of the UK dancehall – and rightly so.

When did you first know that you could deejay?

I figured out I could spit when I was probably about 14/15. Even when Patra was out, I could imitate what she was doing and could match her flow, jumping from singing to MCing/deejaying. I loved Lady Saw and Patra. They were the epitome of females in dancehall: x-rated, sexy, and liberating. I used to listen to Lady Saw a lot, but I had to hide it from my mum because her lyrics were so raw [laughs].

It wasn’t until 2002/3 when I worked with Suncycle that people got to hear the spitting side to me. Initially, I was okay but, as time went by, I was around the likes of Dolamite, Gappy Ranks, and Reddman, and they helped me to polish my craft – and I made sure I sounded as good as them! I was born into dancehall and reggae music. My dad is from a well-known sound system called Exodus, and my uncle was with Special Edition for a while, too. But I was a garage kid. I adored garage music, and that’s what I initially wanted to roll with but with a bashment twang to it. When I heard Suncycle in 1999, I thought, ‘Wow! These lot are heavy. They’re from the UK, too? I need in on this!’ Four years later, I joined them.

How did you go about getting yourself noticed by the members of Suncycle Crew?

We were all living in the Harlesden area, and Naff Skrilla heard me on a local pirate station and we linked up. He brought me to the studio where Dolamite was, he was the CEO, and he liked my sound and the fact that I sang at first. We rolled with that and I wrote and sang loads of hooks for them. Then we got a licensing deal with EMI in Japan, with our I Am Somebody – which was released in 2004 – I laid a lot of bars down on that! So yeah, it just went from there, really.

Okay, so why did the group break up? You were blowing up, and then all of a sudden…

I didn’t want the group to break up at all, but a lot of the camp felt disheartened that we were kinda segregated from the UK scene. We weren’t asked to be on certain shows because grime was the big thing. Also, management weren’t doing a great job; except when taking our bloody money! I managed to buy a car from our deal, but we were ripped off big time. The group members then started to leave, one after the other. Gappy Ranks was the first to leave, and we were fuming when he did because we felt that loyalty should be key. Looking back on it now, I see why he did and he’s a star and always knew he was destined for solo success. It got to a point where it was just myself, Dolamite and Lante gigging and recording, etc., but then Dolamite wanted to concentrate on production work for other artists and didn’t want to perform anymore. I still work with Dolamite on his productions, though.

To be honest, I felt a bit panicked because I thought that my dream was prematurely ending. But I just kept on going until I got contacted by Sticky in 2007. I stalled our meeting for a long time, as I was on my college studies. He hollered on MySpace again, and sent me a few beats, which I thought were good, but wasn’t for me to vocal. I’m really fussy about the productions that I choose to lay my vocals on, and it doesn’t matter how big of a producer he or she may be. So, a few months past and Sticky showed me a tune that I knew was for me. I heard a loop and said, “That’s it! I want that one.” He seemed shocked and told me that it was an old loop, but I didn’t care. I went home, wrote to it, and “Sticky Situation” was born.

How has the independent grind been for you? It can’t be easy being a female in the dancehall game, let alone being a British one...

It has been a slog, but I’m also lucky that people have embraced my sound. I think people appreciate the way that I bounce on different genres with my dancehall style. But yes, it has been difficult. I’m aware that most don’t understand my patois [laughs], but it’s just how it is. I hate hearing un-authentic Jamaican accents by non-Jamaican artists, it just jars me because it sounds whack! I can’t and won’t really water down my accent, because it’s natural for me to spit that way. Plus, the European market, and other places around the globe, seem to love it and always send for me to perform. I think England needs to appreciate me a little more, to be honest, especially radio. Come on! I’m doing my bit for the UK music scene. I was born and bred here!

Whether you’re featuring alongside grime MCs, spitting over dubstep riddims, or working with big names like Toddla T on projects, your name seems to be in all the right places. Radio aside, you’ve been supported by the British press a lot!

Yeah, I’m surprised about the critical acclaim I’ve received from publications like NME. They’ve always been focused on indie bands, so it was a big deal for me when they showed me love. I appreciate all of the journalists and platforms who have given my music time: i-D, Dazed & Confused, CLASH and, of course MTV, I really do appreciate it all. Hopefully my forthcoming albums, EPs and mixtapes will also be appreciated, because I’m here to stay.