MTV IGGY: Random Impulse’s Guitar-Grime Is Up Next 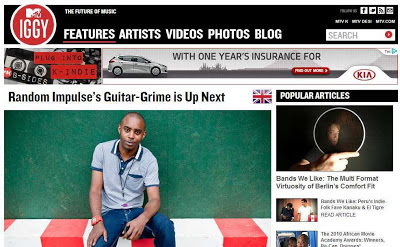 Where He’s From: London, England

During the last decade, Jovel Walker has trailblazed his way through the UK's underground music scene. Going under the alias of Random Impulse, he started out as a grime MC in the early-00s, spitting his heart out over 140BPM on pirate radio alongside some of the scene's top dogs: Black The Ripper, Dot Rotten, Wiley and Chipmunk, being a just few of them. Speaking of Chipmunk, who's now known simply as Chip, Walker was one of the first to ever see talent in the young lyricist, signing him to his independently-run record label, Renaissance, before Sony and pop got ahold of him. To date, the label boasts sales of close to 20,000 mixtapes sold – with 16,000 of them being the owner's own work.

Random Impulse has always stood out from other grime acts. His love of indie music was apparent from the get-go, and he began to teach himself how to play the electric guitar in 2010. Since then, he's played the instrument in all of his recordings, and at gigs. And when it comes to live shows, Impulse goes to town! His performances have proven on many occasions that grime being the new punk isn't actually that far off. Over the last couple of years, Walker has sat back and watched best friend Ed Sheeran slowly take over the music industry, but we think the world's just about ready for another emotionally-charged guitar-player (with a difference) to take the main stage.