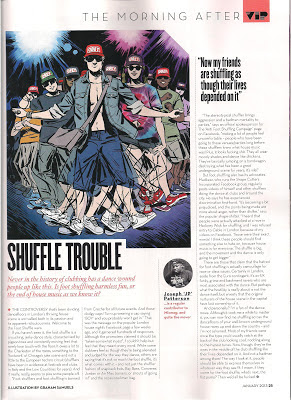 Never in the history of clubbing has a dance wound people up like this. Is foot shuffling harmless fun, or the end of house music as we know it?

The controversy that’s been dividing dancefloors in London’s thriving house scene is unrivalled both in its passion and its apparent ridiculousness. Welcome to the Foot Shuffle wars. If you haven’t seen it, the foot shuffle is a crouching, jerky dance style, characterised by pigeon toes and constantly moving feet that rarely lose touch with the floor. It owes a lot to the Charleston of the 1920s, something to the ‘footwork’ of Chicago’s juke scene and not a little to the European techno circuit (shufflers have been in evidence at festivals and clubs in Italy and the Low Countries for years). And it really, really seems to piss some people off.

"Foot shufflers and foot shuffling is banned from Creche for all future events. And those dodgy caps! Turn up wearing a cap saying 'BOY' and you probably won’t get in." That was the message on the popular London house night’s Facebook page a few weeks ago, and it garnered hundreds of responses. Although the promoters claimed it should be "taken somewhat in jest", I couldn’t help but feel that they meant every word. While some clubbers feel as though they’re being alienated and judged for the way they dance, others are saying that it’s not so much the foot shuffle, it’s what comes with it – and not just the shuffler fashion of snapback hats, Ray Bans, Converse, Jordan or Air Max trainers, or shouts of ‘going in!” and the occasional man bag.

"The stereotypical shuffler brings aggression and a badman mentality to parties," says an official spokesperson for the 'Anti Foot Shuffling Campaign' page on Facebook, "making a lot of people feel uncomfortable – people who have been going to these venues/parties long before these shufflers knew what house music was! Plus, it looks fucking shit. They all wear moody shades and dance like chickens. They’re basically jumping on a bandwagon, destroying what has been a great underground scene for years. It’s vile!”

But foot shuffling also has its advocates. Madkezz, who runs the Shape Cutters Incorporated Facebook group, regularly posts videos of himself and other shufflers doing the dance at clubs and around the city. He says he has experienced discrimination first-hand. "It’s becoming a bit prejudiced, and the points being made are more about anger, rather than dislike," says the popular shape-shifter. "I heard that people were actually attacked at a rave in Hackney Wick for shuffling, and I was refused entry to Cable in London because of my videos on Facebook. Those were their exact words! I think these people should find something else to hate on, because house music is for everyone. The shuffle is big, and the movement and the dance is only going to get bigger."

There are those that claim that the hatred for foot shuffling is actually camouflage for race or class issues. Certainly in London, aside from the Euro contingent, it’s ex-UK funky, grime and bashment ravers who are most associated with the dance. But perhaps what the hostility is really about is not the dance itself, but anxiety that the original nurturers of the house scene in the capital have lost ownership of it.

And personally? I’m a fan of the dance move. Although it took me a while to master it, you can now find me shuffling across the dancefloors of your well-known underground house raves up and down the country – and I’m not ashamed. Most of my friends were once the type you’d usually catch at the back of the club looking cool, nodding along to the hypest tunes. Now, though, they’re the ones in the middle of the club shuffling like their lives depended on it. And not a badman among them! The way I look at it, people should be able to express themselves in whatever way they see fit. I mean, if they come for the foot shuffle, what’s next, the fist pump? Then we’d all be fucked.