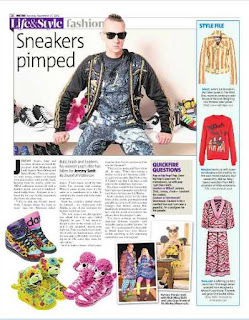 Jeremy Scott’s loud and eccentric designs are loved by everyone from Madonna and Lady Gaga to Nicki Minaj and Justin Bieber. There are trainers with wings, trainers in leopard print and trainers with gorilla heads bursting from the ankles, while his AW12 collection kicked off with a bomber jacket covered in multicoloured teddy bears. And just as he’s loved by the pop world, inspiration also flows the other way.

"I like to play my friends’ music while I design things for them to wear," says the American stitch-maker. "I have music on all the time while I’m working and creating. When it comes to my show, it’s the same as a soundtrack to a film. It completes the visual and helps make a narrative."

Scott has created a global empire for himself – his relationship with Adidas is one of the strongest the fashion world has seen. "The first project we did together was about ten years ago, called !Signed," he says. "I was asked to design a shoe in my vision so I created a silk jacquard, money-print high-top. That was made in an example of only one hundred pairs, which are now quite collectable, even fetching up to 15k when they show for sale online."

So if he had to choose, which piece from his lines for the sportswear firm was his favourite? "There are so many and I love them all," he says. "That’s like asking a mother to pick her favourite child – it’s just not possible. But I’d be a liar if I didn’t say that I do have a soft spot for the teddy bear high-tops." Yes, those would be the exact teddy bear high-tops famously worn by the very brave hip-hop star, Lil Wayne.

Scott’s designs aren’t for the plain Janes of this world; you must be bold and able to carry it off with a certain swagger that money cannot buy. Seamlessly uniting the world of couture with the world of streetwear has always been the designer’s aim. "I’ve been working on bringing high-end elements together with wearable and accessible fashion," he says. "It’s exciting that I’ve been able to blend these two very diverse worlds and bring to life something completely new and original."

Pop or hip hop?
Pop. Even hip hop is pop now. It’s mainstream, so with pop I get them both.

Couture or streetwear?
Streetwear. Couture is for a rarefied few and I am now a populist. I’m a designer for  the people.