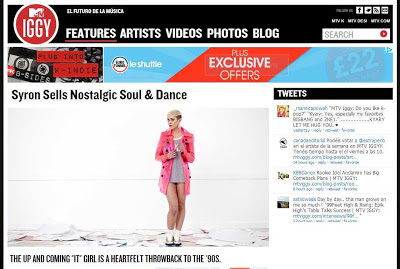 Daisy Tullulah Syron-Russell is a dance music-loving pop princess with soul. Born and raised in south London, the singer, 19, surfaced earlier this year when she featured on Rudimental's deep house cut Spoons. Following the success of her first collaboration with the chart-topping production crew, Syron then released the cool, future-garage number Breaking. The track received major support from The xx, Zane Lowe and BBC Radio 1Xtra, and remains one of the most-talked-about offerings from an up-and-coming British artist in 2012. Recently, Syron has been working closely with Defected Records' top beat-makers, lending her vocals to Solo and Tensnake's tech house and nu-disco productions. But, as she promises, "the best is yet to come."

You burst onto the scene earlier this year when you featured alongside MNEK on Rudimental’s track Spoons – which was, and still is, a popular draw for underground house DJs. What was that whole experience like for you?

It was wicked! It was obviously the first thing anyone had heard of or seen of me, with the video as well. It was really good to work with MNEK because I was already good friends with him. He works in the studio next to me, Rudimental, Whizzkid as well. It’s really good to do things with Black Butter Records, and I’m going to continue doing stuff with them – it’s like a family thing, it’s been good. I’ve done a lot of shows with Rudimental: Hackney Weekend, Isle of White Festival and XOYO, so it’s been sick, really good.

You just mentioned the brilliant independent record label, Black Butter Records. I think what they’re doing is amazing! Tell me how your connection with them came about…

That was literally from Spoons, which was released on Black Butter Records. MNEK was working next door and he told me to come in, and he showed me a track that he had written. Rudimental and MNEK wanted someone else to vocal half of it so I did it, and I’ve carried on working with the label ever since. So Breaking just came out and then I’ve got my second single coming out in February, both on Black Butter Records.

Your debut solo single, Breaking, was extremely popular on the blogs and music websites. The whole new-aged garage feel on it was fresh in so many ways. Are you happy with how well the single did, in terms of online buzz?

Yeah, most definitely. I didn’t really have any expectations. I think everything that I release or put out online, as long as it’s a different introduction to me as an artist to different audiences, then that’s always good. As long as people like it and support it, then that’s good. So yeah, I was really pleased with the response.

You’re a pop singer who has a lot of soul. I’d love to know who you grew up listening to…

Singer-wise, on a vocal level, I’d say people like Alicia Keys, Erykah Badu, a lot of girl bands like TLC, and even Stevie Wonder. My dad loves Stevie Wonder so I was always singing along, listening to him and just thought he had an amazing voice. I’ve always loved soulful kind of voices. I guess there’s always a pop element in my music, and I’ve always liked listening to chart music, but soul singers have definitely inspired me a lot more than pop singers.

You’ve been working with a lot of Defected Records producers recently, featuring on Solo’s Home Is Where It Hurts and Tensnake’s nu-disco number, Mainline – which I’m a massive fan of, by the way. You’re, like, the new dance-pop princess [laughs]…

[Laughs] Thanks! I’m really happy with everyone who I’ve worked with so, with the album and things coming out, I think I’m going to carry on working with all of the same people who I have worked with so far. Tensnake is going to do something for my album, which I’m really excited about. I just want to keep on working with everyone that’s in the scene of dance music, garage and house music, just so that it kind of ties in together.

You remind me a little bit of Katy B and Jessie Ware because, like them, your love of dance music comes across so strong. Are you a fan of their work?

Definitely! Katy B went to the BRIT School and Jessie Ware’s very soulful. I wouldn’t compare what I’m doing to them, but I think definitely they are inspirational.

Who’s on your iPod right now?

I listen to a lot of The Weeknd and Frank Ocean, it would be really cool to do something with them. People like Lady Tragik and Brooke Candy, too. I wouldn’t say Brooke Candy influences my music but style-wise and attitude-wise, she’s definitely a big influence. She’s about girl power, which is what I represent as well. Then there’s Jessie Ware, obviously, Disclosure, Bondax, and people like that.

Brooke Candy is definitely out there, in terms of her dress sense. How much a part does fashion play in Syron’s whole persona?

I’m more about style. I’m always big on Nike trainers, I’ve always got really long, patterned and colourful nails, and short, bleached blonde hair. I just wear what I like. I’m not worried about whether it’s in fashion, necessarily, just as long as it’s comfortable for me.

Okay, so what’s next on the agenda for Syron?

I’ll be releasing my second single, Here, at the beginning of next year. I put it up on my SoundCloud a little while ago to see what people thought of it, but then my management told me to take it down because there was some interest in it. I remember you posted it on MTV UK and 1Xtra had it as their ‘Song Of The Week’, but I hadn’t actually released it. So now it’s been re-worked and will be coming out on Ministry Of Sound/Black Butter Records next year. I’m excited!