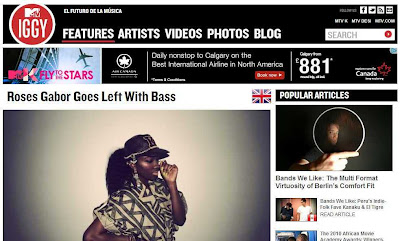 Where She’s From: London, England

For Fans Of: Katy B, Delilah

Roses Gabor got her first taste of music success in 2006 as the then-unknown voice on Gorillaz’s global hit Dare. Before she got the call from Damon Albarn to feature on the track, she had been earning a respectable living from working in the banking industry – but when the single reached platinum status, Gabor soon swapped counting numbers for a life on the road as a guest vocalist for the chart-topping band.

Growing up on playlists consisting of everything from soca and reggae to the pop greatness of Michael Jackson and new romanticism of Adam & The Ants, has helped – along with listening to American hip-hop, Björk, Emiliana Torrini, and the underground sounds of pirate radio during her teens – to shape Roses Gabor into the leftfield act that she is today.

And it's the British bass music scene that has nurtured the breathy, sweet-toned singer's talent: Redlight saw the light in 2010 and got her to bless Stupid, which ended up being released on Digital Soundboy. The label's head honcho, Shy FX, then added Gabor to the line-up on his jungle anthem, Raver, before SBTRKT invited her to vocal his electro-funk beat for Pharaohs. Having just released her debut solo single, Stars, on Toddla T's Girls Music record label, this British rose is blooming beautifully.