MTV IGGY: Rejjie Is About To Make It Snow 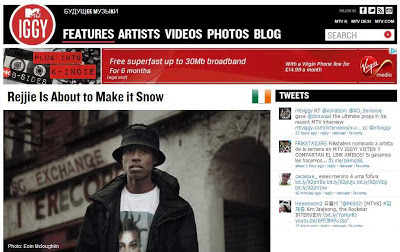 "I'd say my sound's a mixture between a drunken Irish guy and Charles Bukowski," says Rejjie Snow, 19, with a grin on his face. "And that is no joke." An unsigned rapper from Ireland, Snow has been one of the more successful from his hometown to get noticed by the wider rap arena—something he set out to do from the age of 11, when he first put pen to paper—and was even accused by Complex Magazine last year of being the man behind Captain Murphy, the masked emcee. Rejjie Snow kept the industry guessing—full-blown think-pieces to boot—until enough eyes were on him to spread his authentic word, and now, he's getting looks off of his own quirky merit.

Snow's leftfield stylings has seen him being compared to artists like Tyler, Earl Sweatshirt and the rest of the Odd Future crew. However, this Miles Davis, Andre 3000 and Nas-inspired rap rookie wants you to pay closer attention to his lyrics, because his message has "more substance than you might think." Currently signed to Elton John's Rocket Music management, Rejjie Snow joins the likes of Ed Sheeran, James Blunt, Sky Ferreira and more in their quest for world domination. But, dare we say it, in a much cooler, relevant fashion. MTV IGGY gets to know the talented prankster.

Being the underground rhymer from Ireland that you are, you’ve done pretty well in getting the attention of the mainstream hip-hop industry. Tell me a few things that you, perhaps, did differently to others…

Thanks, man. Well, to be honest, with a face like this, could you blame me? [Laughs] But on a serious note, I feel that the attention I’m getting – in terms of a global spectrum – really stems from the fact that, before I even sat down and said to myself that I would really push myself as an artist, I knew being from the small Emerald Isle would always be tougher for me to get recognized with what I was gonna do. Regardless of talent or anything! So, I took it upon myself to not only make music for the hoodlums of Dublin City, but to also make music for the little boy in India and hope that he, too, can be inspired by the rhymes and ideologies I spit. There’s no denying that my music is greatly influenced by the early NY boom-bap sounds and poetry. I really consider what I do a form of poetry because before I even took to the mic, I scrolled the words of greats like Richard Aldington and Rumi.

That’s an interesting thought, actually. I feel I would be completely indulged in perfecting my live performance and making sure I executed the craft, maybe through a live instrument of some sort during my performance. At the end of the day, there was a time when people didn’t have the internet to check up on their favourite artists. All they had was what they saw live – and that was it! So I feel that would be my biggest characteristic. I also feel I would be the most controversial person in the world, and would’ve probably included a live circus at my shows [laughs].

What’s stopping you from still doing that? [Laughs] Anyway, style seems to play an important role in your presentation. What are the essential items and labels that you can’t live without?

Everyone seems to say this, but it really isn’t an essential part of who I am or what I do. I just wear whatever but, for some reason, it’s got to a point where people keep on saying that I’m one of the best dressed people alive, and all that madness [laughs]. But it’s weird. I’d say style plays an important part in my live act, where you will, for the most part, catch me in a tracksuit – and that’s solely down to me finding a certain level of comfort and trying to keep it all about me and my music.

Okay, back to the music then [laughs]. The online world went crazy last year when news surfaced that you were the man behind the never-before-seen, mysterious Captain Murphy. For those unfamiliar with what went on, what was it all about?

Rahhh! Blap! Blap! [Laughs] Yo! Okay, so let me clear this up because I know Complex Magazine and them went ahead and published some article without even hitting me up, but here it is. Basically, my old Twitter – which had a couple thousand followers – was blowing up every day with tweets saying, ‘We know you’re Captain Murphy. Oi, Rejjie! Just admit it.’ So, I came home one night under the influence of my beautiful friend, Hennessey, and recorded some video – or more like an Oscar-winning public service announcement – saying that I was, in fact, who they thought I was. Then all of a sudden, the blogs caught wind of it and the rest is history! Shout out to Mr Murphy [laughs].

Were you happy with the attention that it brought you, though? I mean, any publicity is good publicity, I guess [laughs]…

[Laughs] Yeah, of course! Like, I didn’t really pay it much attention at all, man. I just saw it as something for people to laugh about. Even though I’m a small fish in a big pond, there needs to be more Flava Flav’s, etc. It’s so boring and dry these days and everyone’s ego is so far stuck up their backside.

[Laugh] You’re not wrong there! Your style of hip-hop comes across quite left-field (see: Shrine Of Jehovah), as you tend to use really strange-sounding electronic beats and sound effects. Has that been a conscious decision in a bid to be different, or has it all just been a natural thing?

As a person, I feel that I’m quite left-wing. I try to hide my most obvious beliefs in metaphors to avoid all that comes with it. But, erm, yeah, I would agree with you; everything I do is natural to what I feel and how I feel.

I heard through the grapevine that you’ve been working with King Krule and grime’s Darq E Freaker on some new music. If true, can you tell us a bit about what we can expect from those collaborations, and when we’ll be able to hear them?

Yeah! Well, I’m working with a few people. Most of the people associated with these projects are set but, with every good thing, it’s finding the right time to do stuff with it. I’m gonna drop this Rejovich project quite soon. In fact, that’s my number one priority right now. I’m in a really weird and euphoric state at the moment, and I’m just trying to find the missing pieces to finish it off.

Let’s talk about your debut LP, Rejovich. What’s it all about?

The name of the album was actually given to me by some European guy I met out one night. We had the deepest conversation ever and there’s a track on there dedicated to him. I thought, ‘Why not call the whole thing Rejovich?’ It’s really a dedication or, more-so, a celebration on me living out a dream and getting the chance to share it with people across the world.

You’ve supported MF DOOM on tour, and you most recently opened up for the much-talked-about Kendrick Lamar. How were those experiences for you, and what did you learn from being on the road? Oh, and if you have any interesting tour bus stories to share, then please do so [laughs]…

[Laughs] It was an honor, to say the least. Just being around people of that calibre was quite amazing in itself. It planted all the right seeds which made clear that this is what I wanted to make my living doing. I got to experience the whole thing on a different level: being backstage and seeing everything front-on. I could never tell you of the marvellous stories, but all I will say is that the girls are crazy!

Lastly, what do you have to say to the people who have said that you 'rap too much in an American accent' and 'try too hard to jump on Odd Future’s wave'?

All I can say on that is listen to my new album. Oh, and don’t lose sleep on that because, remember, everything I do is for a reason. It might take you a year or so to find out exactly what I mean when I say that, but it will soon become clear. And, my accent is one of a man who’s scrawled many cities and places and dedicated it all to his beloved friends who he misses.