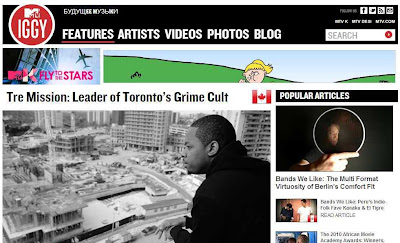 Where He’s From: Canada

For Fans Of: P Money, JME

Not every rhymer from Drake's native Toronto wishes to follow in his hip-hop steps. Down in the deep, dark streets of the Canadian city lies a small congregation of MCs and producers who have purposely disassociated themselves from the country's burgeoning rap movement to form their own cult-like version of the UK's grime scene. Leading the pack is Tre Mission, a 21-year-old MC who made an instant connection with the 10 years young genre after hearing Dizzee Rascal's I Luv U. "Grime was just something new and completely unique to me," he says, "but I was able to relate to it at the same time. Every aspect of the music grew on me very quickly, and it allowed me to be different from everyone else around me."

2010 saw Tre Mission drop a freestyle over one of the scene's biggest instrumentals at the time, S-X's Wooo Riddim, and it was the hunger he displayed that initially grabbed the attention of the industry's top platforms and tastemakers. Soon after, he took on True Tiger's grimestep smash, Slang Like Dis, before releasing original material in the form of When I Come Thru and Maxin’ Everything. Grime's popularity may have decreased in recent times—what with everyone "cutting shapes" to deep house and all—but this man's mission is to fly the flag for the genre until the very end. "As long as you make undeniable music, it won't go unnoticed," says Tre. "This is how it goes in underground music: today it might be on top, tomorrow it could be third, next week it could be gone, but then it could come back on top the following year. Grime's good, man. One thing I can control, though, is the future of my own music."