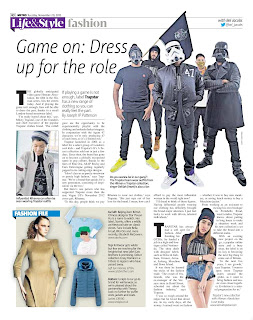 The globally anticipated video game Hitman: Absolution, the fifth in the Hitman series, hits the streets today. And if playing the game isn’t enough, fans will be able to dress the part, too, thanks to a certain streetwear label based in London.

"I’m really hyped about this," says Mikey Trapstar, one of Trapstar's founding members. "The collab gave me the opportunity to be experimentally playful with the clothing and unleash darker imagery. In conjunction with the Agent 47 character, we’re only producing 47 of each item, so it’s a limited run."

Trapstar launched in 2006 as a brand solely for a select few of London's cool kids (its debut collection, It’s A Secret, sold out in a matter of hours). But as time went on, the demand grew greater. Trapstar eventually gave in, and is now positioned in pop culture as a must-wear label, with some of its main supporters being Rita Ora, A$AP Rocky, and Cara Delevingne, to name a few.

"I don’t class us as purely streetwear or purely high fashion," Mikey explains. "We’re a brand that speaks for a new generation, consisting of inspiration via the two." One star who has supported the brand more than most, though, is none other than VOGUE US' November 2012 cover girl, Rihanna.

"To this day, people think we pay Rihanna to wear our clothes," he says. "She just reps out of her love for the brand. I mean, how can I afford to pay the most influential woman in the world right now? I’d dread to think of those figures [laughs]. Having influential people wearing our clothing has definitely brought the brand major attention. I just feel lucky to work with driven, talented individuals."

Mikey Trapstar has always had a soft spot for fashion. After finishing his GCSEs, he landed a job in high-end London boutique, Vestimoda; a shop that dealt closely with fashion houses such as Dolce & Gabbana, Versace, Armani, Iceberg, and Moschino.

It was there Mikey learned the tricks of the fashion trade. "The owner of Vestimoda, who was the ex-manager of the Versace store in Bond Street, schooled me about the fashion industry," he says. "I was so rough around the edges but he loved that about me. In my early days, all the money I earned went on fashion – whether it was to buy new sneakers, or saving lunch money to buy a Moschino jacket."

From working as an assistant to owning his own boutique in Portabello Road, west London, Mikey Trapstar knows about putting in long hours to make a situation work. And the brand's latest collection is set to take them into a different realm. "In the next five years, I see growth," adds Mikey. "I want to open more Trapstar stores around the globe, and I want to bring fashion and music even closer together. Evolution is a natural progression for us."