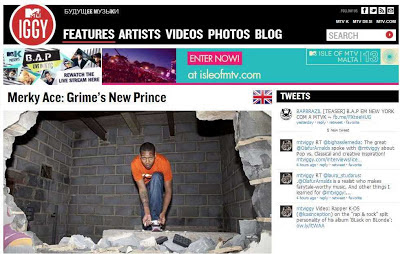 A batch of hungry newcomers invaded the UK grime scene two years ago, and it was highly needed: with most of the top MCs off trying to penetrate the mainstream with their pop-tinged efforts, something drastically had to be done to keep the underground afloat. In the depths of SE London stands tall and firm one of the scene's leading newbies—Merky Ace, with rhymes conjured up from a dark place and channeled through the angstiest delivery you'll have seen in a while. With a laudable work ethic and beat selections that always win, these factors have contributed much to the decision of tastemakers giving the genre another shot and crowning him the genre's new prince. MTV IGGY recently sat down with the fresh-faced grime royal to find out more about his journey to the throne.

How would you describe a Merky Ace listening experience to an inquiring mind?

Well, it’s an authentic street sound. Everything that I usually put out is hard-hitting and full of bass. I’ve been spitting for a while now, so it’s at a professional level but is still grimey as fuck! My aim is to get people moving, really. I’m all about the energy, and I express that through my music on many different scales. Talking’s all well and good but, to get a proper picture of what I do, your best bet is to actually listen.

When I listen to your music, it’s clear you wear your emotions on your sleeve – which is what grime music was initially built on: a youngster living in an inner-city, pouring their heart out over gritty beats – but I personally think a lot of MCs have lost that. What do you hope people take away from your music?

I hope people take away a picture of me. I like to get personal a lot of the time through my bars so that people who might not know me can get an idea of what I’m like, no matter my subject matter may be. I also aim to teach people what it’s like where I’m from, and what I’ve witnessed growing up. I only make music I like, so I hope people get a taste of what I’m into and what gets me bopping my head [laughs].

And your thoughts on the scene’s current state?

I reckon it’s changed a lot, actually. The sounds evolved a lot, and it has become more professional. A lot of the stuff sounded samey before, but the sound has more range now, and can appeal to different people – depending on the type of artist you are. And the productions have gone up several levels, compared to the older stuff. People still appreciate the old beats, though, because they defined the scene. Personally, I wouldn’t change anything. I like the direction it’s gone.

On your come-up, which grime acts made an impression on you?

I grew up listening to a lot of music coming out the early grime scene, as well as garage rap and early dubstep. The main artists out of those were MCs like Dizzee Rascal, Esco, Newham Generals, R.A, Essentials, and M.I.K. Producer-wise, I was into a lot of Skream, S.K.I.T.Z Beatz, Plastician and other UK producers on the underground circuit. Dizzee really caught my attention, though, because he was one of the first to really take grime to a higher level – I’d always hear him on radio tearing up sets. R.A, Essentials and M.I.K are all from south London, so I heard them naturally as they were doing a lot for grime in the local area. They were always on stations such as Flashback, and On Top – which were big at the time. I heard a lot of the other stuff through stations like Rinse FM and De Ja Vu. Pirate radio was a big avenue in the UK, and a lot of the artists who have come up through the ranks today made it through getting coverage from there and tearing up raves. I’ve always been into the greazier, darker stuff and I guess they just appealed to me the most.

For a fairly new member of the grime scene, you’ve released quite a lot of material. But what has been your favourite release so far, and why?

My favourite track would have to be the intro to my CD, All Or Nothing. The track itself is very hard-hitting and bassy, but has a more mellow feel to it in comparison to my other tracks. Every time I listen to the CD, I find it hard to listen to that track without rewinding it over and over [laughs]. My favourite EP would have to be Catch Up, for the simple fact that it was more like a mini mixtape. It was ten tracks strong, with all of the big tracks of mine that were floating about at the time – including the title track, Catch Up, which has done a lot for me, in terms of putting me in different places due to its support from the likes of Baauer last year. I must give a special mention to my debut mixtape, Blue Battlefield, as that was what really got things in gear for me.

There’s a big buzz around your new project, All Or Nothing – which must be exciting for you. What will it give to your fans that they don’t already have?

The aim behind All Or Nothing was to give people a proper insight into what I do, and who I work with. There aren’t really that many collabs on there, because I wanted people to get to know me and Family Tree better. I spent a lot of time in the studio getting it to the level I wanted it, and I made sure that I was happy with everything. It covers all the types of sounds I’m into right now and will appeal to fans of my older stuff, but also new audiences because it ranges from different styles in each track. After All Or Nothing comes my next CD, Play Your Position. That one has more collabs and gives people a chance to see who I’m working with and rating. I took it up a notch on the production side of things, too. I kept it mostly in-house, with a lot more tracks made by Family Tree producers, Faze Miyake, Splurt Diablo and Jack Mason – who are all on top form right now. It’s one to look out for, as well as the Family Tree CD, which is also out this year.