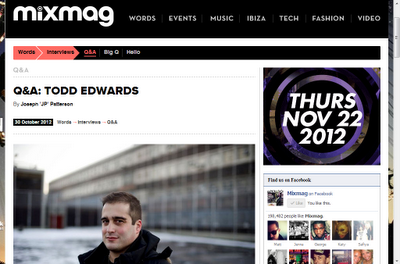 Todd Edwards is undoubtedly one of house and garage music’s biggest and most revered creators. The legendary New Jersey-born producer and DJ has built up a highly respected name within dance music over the years for his long-standing relationship with the UK garage scene, so much so that everyone decided to give him a new middle name: 'The God'. Twenty years deep in the game, 39-year-old Edwards has seen many come and go in garage, but he stood by its side even when many thought it was dead and decayed. But there's a UKG revival currently taking place, and Todd Edwards is the great high priest.

You've been a major player in the house and garage scene for many, many years. How have you managed to stay current throughout the ever-changing waves of bass?

To be honest, I just do what I feel inspired to do. It's a blessing that what I've done has had an audience the length of time that it has. I'm always looking for new samples, and ideas just come to me when they do.

Which tracks do you feel got you your middle name, 'The God'? (Laughs)

I believe it was 'Saved My Life', the remix of 'As I Am' and 'Alabama Blues', and all the work I did on Nervous Records that put me on the map. As far as the nickname, it's funny that it happened. All the tracks I mentioned were made by an insecure twenty-something-year-old who wanted to quit every five minutes (laughs).

(Laughs) Thank God you never quit! Pun intended. You've done remix work with some of the world's biggest artists, but what remix has been your favourite to work on, and why?

Each remix has its own vibe. The most memorable one was Gintare's Transnavigation. It was not a 4/4 written song, so the vocals posed a challenge to fit into a house track. I love a challenge. To add to this, I had the deadline and my grandmother, whom I was very close with, passed away that week. That will always stay with me.

Bass music has become a major player within the mainstream world in recent years, with dubstep being the most prolific. Why do you think this is?

Music goes in cycles. If one generation is into something deep and soulful, it's possible the next generation will want something with more of that tribal, instinctual energy. We always need change. You can't eat the same food every day, it gets boring. It's the same with music.

So true! Although you stuck by garage music's side, many of your peers left the genre for dead. What is about garage music that you love so much?

That's actually a misconception. The type of club music I do pre-dates garage. My focus is on the art of sampling. That will always be a first love for me. I find it interesting how people speak about garage as it being dead or dying. I've heard that for years! Yet, there is still work to be had, gigs to play and stations that support it. I really think labelling is a bad thing. It segregates music, which is a contradiction for an art form that's supposed to bring people together. Garage equals house music with shuffling rhythms, no? No matter your viewpoint on the scenes, I make music that inspires me. I live out in LA, and have been listening to a lot of deep house out here. Don't be surprised if you hear that showing up in what I do.

Let's talk about the current UKG revival. Thanks to the likes of yourself, DJ EZ, DJ Q, Mike Delinquent, and even newbies like Royal-T, people are starting to fall in love with the sound that birthed many of today's bass-filled genres all over again. What are your thoughts on the whole thing?

I have the utmost appreciation for those you just named. Especially DJ EZ, because he’s like a brother to me, and has been my greatest supporter in the scene.

Do you think the current love affair with garage music will last this time around?

Good club music is good club music, and I've been in the scene long enough to see several returns to garage. It never died. It has its niche. Sometimes, a niche gets larger and becomes accepted on a grand scale. Dubstep didn’t just land and takeover, it grew in popularity – as do all successful musical forms. The garage scene may grow and then thin out again, but it's better to live in the moment and enjoy what's going on.

Which up-and-coming producers/DJs should people be paying close attention to?

After I'm done with this next group of gigs in the UK, I intend to take a solid block of time and dedicate it to listening to new music. I've been extremely busy between moving to LA, getting settled, playing gigs and doing six remixes, so I haven't had time to listen to much. I'm really looking forward to taking that time out, though. There are so many talented producers and groups out there, and I intend to know as many as I can.

And what do you have planned for the not-so-distant future?

I'm going to be working on a new album. My desire is to show the musical side of myself that few have heard or know about. I’ll be taking the sampling style into different genres. Don't worry, though, there will be plenty for those who want the garage tracks as well.

A version of this appeared over at Mixmag: H E R E