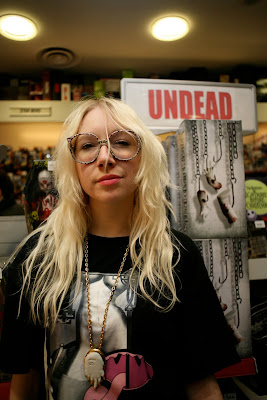 Carri Mundane - who owns fashion label, Cassette Playa - is the Queen of the avant-garde, with her designs worn by Lil’ Wayne and M.I.A, to name a few. Joseph 'JP' Patterson speaks with the grime/metal music-lover.

When did you realise that you had, without sounding cheesy, a passion for fashion?

I don’t think I ever did decide. I don’t think I decided at all, actually (laughs). I always had an interest, less in fashion and more in style; I liked the way people dressed and, from a really early age, I used to play dress-up all the time. I’ve always been interested in sub-cultures and the meaning of style. I decided to make a brand because it’s like art on a mass level: it reaches more people. Everything moves so fast in fashion and I like the way everything is so accelerated. I see style as symbolism.

Which designers did you look up to as you were just getting started in fashion?

Bernhard Wilhelm, Jeremy Scott, JCDC, and also people like Raf Simons, Vivienne Westwood, and Kim Jones. Designers who have a big link with street culture have always been an inspiration. Nigo from Bathing Ape is also another name that I have to mention. He’s the ultimate at building a brand, an iconic brand, and he’s changed the way streetwear brands are seen.

What would you say has been your favourite Cassette Playa season so far? I know that’s a difficult one to answer…

I’d say maybe the first show I ever did, which was Spring/Summer 07. It was called L.S.I and was all about circuit-bending. It was the first time that I really experimented with digital print, which is something that's become a really big part of Cassette Playa now. That’s where it all started, so that was, and still is, a very important time for me. I like this season, but I’m really excited about next season!

Can we get an exclusive on what to expect for next season?

Next season? Not yet! But this season I can (laughs). Well, next season I’m doing a catwalk show. For the last two seasons, I’ve been experimenting with digital presentations (Augmented Reality being last season) and this season we did a video booth installation, so that’s all been great but I really want to go back to doing catwalk shows. This season is called Ancestors and it’s inspired by Native Americans, their mythology and symbolism etc., but then it’s also got elements of 80s rockabilly/psychobilly and The Cramps. It’s a bit trashy and a bit seedy. This season we did a lot more CGI and 3D graphics than usual, for the last couple of seasons we did a little, but this season we had a lot more. I’m obsessed with amateur CGI, like Poser and Daz 3D.

I came across your name through your work within the grime scene about three years ago. Are you still a fan of grime music? It's definitely changed a lot over the years...

I mean, I’m into a lot of different things. If people understand me, then they’d see a thread between all of the things that I’m into. But yeah, I still like grime music, but there’s only a few artists out there who I think is still innovative. Wiley is still producing really incredibly, Dizzee Rascal is still amazing in my eyes, even though he’s making mainstream music. I feel Dizzee's made some great music in the past and still makes fun party music. I got into grime mainly because of its productions, though. Ruff Sqwad has some amazing producers. I was really into early techno, and their beats kind of reminded me of that: really clean and future, and it didn’t sound like anything else - it was really UK. Also, when I used to go to live grime shows, I really connected to it, simply because of the energy. I’m into metal music, and grime nights had a lot of the same energy that I loved: moshing, etc (laughs). I really like industrial and EBM as well, because it’s really dark but tribal, kind of like Goth-dance music. Salem are amazing! The way they remixed one of Gucci Mane’s tracks was amazing. Crystal Castles are sick! Egyptian Hip Hop, too. I love The xx. I think their productions are amazing. Milo from The xx did the soundtrack to our AR show, but These New Puritans are probably my favourite UK band right now - both their music and concepts are so challenging, future, and, above all, British! I also work with a band called Telepathy from New York, who are really into dubstep and you can hear it through their music - they did the soundtrack to my SS10 show. I can talk about music way longer than fashion (laughs).

Me too! (Laughs) So, nu rave. People associated you, along with a few other well-known people in London, with the whole nu rave movement a couple of years back. What are your thoughts on it now that it has kind of died out?

With the whole nu rave thing, I just got really frustrated because people misunderstood what I was doing. Don’t get me wrong, I grew up with rave culture and I do like rave music, but what I was taking from it was the psychedelia and the utopianism of it. I never wanted to re-create smiley culture. I believe in futurism, not being retro. At the time when it was really big in the press, it kind of scared me and I used to find it really hard because people just didn’t get me. Now I just like to keep my private life separate, I never wanted to be famous. I didn’t build Cassette Playa so I can be the face of it, so I’m kind of glad that the whole thing went away. Now I feel that people get be a little better.

You’re not only a fashion designer though, are you? You do styling and you’re also an art/style director for a number of publications. What can you see yourself doing in the long-run?

I still do styling, but only stuff that I really want to do or that pays good money (laughs). I just don’t have the time to do everything. I’ve worked with Vice recently, Dazed & Confused (Japan) and I’ve just gone back to working with SUPERSUPER Magazine after two years. I like what SUPERSUPER are doing more now though, because they really represent youth culture and they’re usually the ones that pick up on things from really early on. But what I really want to do is make more films; I’ve already made about four films.

You’ve collaborated with a lot of different brands, including Nike, Swatch and, more recently, Disney. Who has been the best to work with so far and are there any other brands that you’d like to collaborate with?

I don’t really know who my favourite has been, but I really enjoyed working with Stussy because it was women’s and I got to really show what I can do on that side. I’ve worked with Nike on a few projects, like I made a computer game with them, a capsule collection, and also a limited edition blazer, so I always love to work with them. Nike is such an iconic global brand, and that allows us to access a different audience. But Nike are also about innovation and technology, so not so different to what I'm about. I only want to work with brands when there’s a connection.

And lastly, can we see a Cassette Playa store opening anytime soon? A lot of designers - namely your good friend, JCDC - have closed some of their stores and built an impressive online store instead. Do you see things going down the online route more when it comes to fashion brands?

I would like to have a shop, that’s like a physical space, but I also think online is really important for any brand. I really love cyberspace and that fact that everyone around the world can access the 'net; you don’t have to live in London, Tokyo, New York or wherever. But if you’re going to have an online store, then you’ve got to re-create an in-store experience. It should be like entering a different world!


Hot New Buzz On The Street:

Influenced by iconic cinema, photography, music and contemporary art, TRAPSTAR is an ambassador/spokesman for the new era of forward-thinking creative minds. www.iamatrapstar.com


Mysterious yet vibrant clothing company BENJART are taking the UK by storm with thirst-quenching colour combinations and symbolic uses of design. www.benjartclothing.com

The aim of the ‘fashion sportswear’ brand P C WILLIAMS is to bring a detailed design aesthetic to London’s streetwear scene. www.pc-williams.com


VA-G is recognised for creative design built up of geometric shapes, primary and secondary colour combinations, and detailed attention to the experimental constructions. www.va-gltd.com

SILENT LONDON draws influences from British culture past and present and tailors it for today’s market, crossing genres and scenes seamlessly. www.staysilent.com