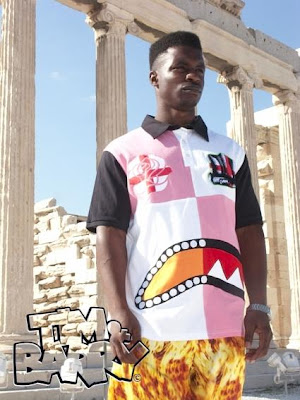 Tempa T: "They never seen anything like that on the island."

Grime’s hype man has the scene at his feet.

Tempa T is a grime MC who is known for his fire tongue and an impressive high-top fade. The 23-year-old east Londoner was first let loose on the public in 2006, alongside Slew Dem, when he attended legendary grime club night, Straight Outta Bethnal. “I got into spitting when I used to listen to old skool garage and a bit of jungle, rap and R&B,” Tempz explains. “I just liked the whole performance that came with it, like, Michael Jackson was a huge inspiration, he entertained people, and that’s where the passion to be on the mic began for me.” All-round hype man, Tempa T always manages to deliver when it comes to live performances, with his high-energy stage presence. It’s all about having fun, as he explains: “I’m a humorous person, quite hilarious at times. I like catching a lot of joke, just my sense of humour – nothing too serious and nothing too violent.”

Tempz has worked with artists such as Dizzee Rascal, Wiley, Skitz Beatz and Plastician, and even caught the attention of Ego 6, a French production outfit, who sent him over to France to work on the track Swing. With the growth of bassline and funky, as well as last year’s electro-influenced grime, Tempa T is entering a UK music scene more diverse than his forebears: “I never really caught up with the bassline scene until a friend of mine from the Midlands told me about it, and you know what? I actually like it. I like the way the Birmingham and Manchester man do their thing. The electro thing is kicking off as well – ‘safe’ to those people who said that grime is just violent, when we have grime acts getting hits in the charts with that sound. It’s all UK music at the end of the day.”

As perhaps befits a man who got his break in Shoreditch, Tempz is also the toast of the fashion crowd, working with labels like Jean-Charles De Castelbajac, Cassette Playa, Fred Perry, Maharishi, Boxfresh and Nike, to name but a few. His memorable haircut has made him a well-known face in both grime and fashion. “I just wanted to do something different and I went back with the 80s style,” he says about his haircut. “When I was out in Ayia Napa, I had everyone saying, ‘Big up Fresh Prince. House Party!’ You can’t really get offended, because they’ve probably never seen anything like that on the island, but people always comment on it and they seem to like it.”

From working on countless film and photography projects with the legendary Tim & Barry, and receiving support from the likes of Logan Sama (Kiss), DJ Cameo (1Xtra) and Tim Westwood (Radio 1/1Xtra), it seems that things are looking bright on the darkside for Tempz. “I’ve got a lot of things in the pipeline: commercials, modelling, my mixtape and my album are both coming out soon. Expect to see more of me very soon. Tempa T. Slew Dem!”