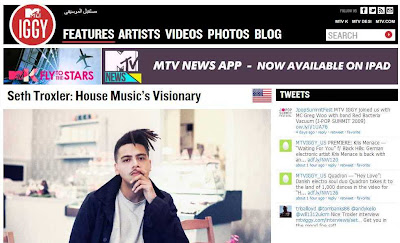 Seth Troxler is a one-of-a-kind character: he talks at lightning speed, he's into spirituality at the highest level (literally), his living in the fast lane has been very well-documented, and his name holds heavy weight in the house and techno scenes. You want to know more about him already, don't you? Born in Detroit, Troxler—who recently topped Resident Advisor's DJ Of 2012 poll—began spinning disks at the age of 16 but soon realized the best way to get the big-buck bookings was to get in the production lab and create the tunes himself. Revered classics such as Hurt and Love Never Sleeps have earned Seth much kudos from the EDM world, and he's still winning a decade on in the biz. Now residing in the house music mecca that is Berlin—a move he made to be closer to friends and turn his passion into a very lucrative form of income—the dreadlocked Rasta house star is now fully in his element.

Your parents were heavily involved in Detroit’s house scene, weren’t they? What was it like growing up on a musical diet of acid house and techno?

My parents were into all types of music, actually. My dad had a radio show and club in Kalamazoo, so I was brought around him playing a mixture of house, hip-hop and R&B, while my mother was more into The Talking Heads, Steely Dan, Sade, and Prince. It wasn’t until I moved to Detroit and started going to raves that their music exposure really sunk in. Many things at the time, I didn’t really see it as being different. Listening to Chicago house tapes on road trips to the beach with your parents seemed normal. Later, when I saw that music in a new context, I was like, “Hey! This is the stuff my parents listen to.” After that, I was hooked.

Take me back to the moment when you first unearthed your talent for making beats...

Well, it was funny. I was 15 or 16 when some of the music-making programs started coming out, but my main focus was always DJing. At the time, some friends of mine made a huge point that if I made tracks, I would have the opportunity to DJ more. So, I started to focus and that’s when I got signed to FXHE, which is owned by Omar S – I was 17. I then went on to start my recording career so it was all by accident, really. I just wanted to be a DJ, and things sprung up from there. More and more people became interested, and now I’m talking to you ten years later.

And which labels and producers were you following as you were finding your feet, musically?

Well, at the time, I was totally obsessed with a lot of the German minimal stuff coming out at the time from labels like Profane, Kompakt, Klang, and Perlon. Plus, artists like Ricardo Villalobos and Wolfgang Voigt were just hitting their stride and their labels Kompakt, Perlon and Playhouse were just really starting. At that time, they had ten releases on the label and now they have over one hundred. It was such a special time for me, as a teenager, to be into this weird German art scene – as well as growing up with the Ghostly Crew, Matthew Dear, and The Minus Crew. I found myself immersed in something special which, I guess, is the polar opposite of what EDM is today. Back then, we were into IDM – intelligent dance music! I’m talking Aphex Twin, Squarepusher, Warp, etc. It was about being different, but smart.

Talking of being different, it’s no secret that you’re into ancient mythology and the mysteries of the unseen world. How did this fascination develop?

I’ve always been a bit off. I remember being a kid, going to the library and checking out books on spontaneous human combustion, and being into loads of sci-fi. I guess it just carried on. I love the idea of the world not being totally explainable, the fleeting moments where I stand back and question everything. There’s something liberating about that. I want to believe that there’s still some magic in the world! Maybe we’re all just dust from the stars, trying to find our way back home?

Man, that’s a lovely thought. It really is. Right, let’s touch on drugs for a moment. Now let's be real, it's no secret that you love to get high. The hip-hop scene has seemingly only just found out about MDMA (Molly), while you were probably dabbing it on your gums a decade ago! You're a man of the future, so what's the future of drugs?

I think people should use drugs responsibly, and use the experiences to add something to their overall experience. I feel drugs like ketamine are very dangerous, and are potentially the heroin of our generation. As far as the future of drugs, I think hallucinogens are the way forward – as they’ve been part of our society for such a long time. If there is a final point in consciousness through drug use, I recommend it. Only at that point are you no longer innocent and you, too, know what’s behind the curtain. Life is a creation of your conscious thought. We’re in a culture that’s not getting high, we’re getting conscious.

Moving swiftly on, apart from yourself and the members of Visionquest, who else do you think is setting the levels right now?

There are so many people in music making it happen. I love bands like Phoenix, Wild Nothing and Blood Orange – they’re all putting out amazing music. In electronic music, I think the crews like Innervisions, Crosstown Rebels, Dirtybird and Hot Natured are putting out really accessible music, that’s both deep and musical. It’s all taste, but if you’re just getting into Skrillex or Avicii, it’s like getting into Britney Spears. There are artists out there like Ricardo Villalobos or Mortiz Von Oswald who are like Hendrix or Zeppelin. Dig a little and you’ll find a world of beautiful, far-out music, which is full of emotion and depth. Just look!

So, Visionquest … How did you meet Ryan Crosson, Shaun Reeves and Lee Curtiss to form the label?

It’s actually super funny. When I was a teenager, Ryan Crosson was the first customer on my first day in the record store that I was working at. We both knew Shaun Reeves who, years later, introduced us to Lee Curtiss. At the time, Lee lived a few miles from Ryan. We were all hanging out when I was around 20, living with my first live-in girlfriend. One day, I came home and she was sleeping with our neighbor in our bed. Lee came to me and said, 'You seem like a nice guy down on his luck.' So, I moved in with him, and we all started to constantly hang out. In a way, that’s when Visionquest was born. Funny, but true.

Wow! That’s some story. Okay, so tell me about the new project, Visionquest Thirteen. How excited should fans be?

Very! Visionquest Thirteen is a series of thirteen curated parties that we’re throwing around the world. We’re doing our own production for it and trying to make distinctive, immersive spaces. We found that in our collective rave memories, the events and moments that stuck in our mind were the times where not only the music but the environment was like something we had never experienced before. With Thirteen, we’re trying to recreate those moments for a new generation. I think, as a whole, people want something new. We all want to be excited again. I want to be excited again! So, this is our first real effort trying.