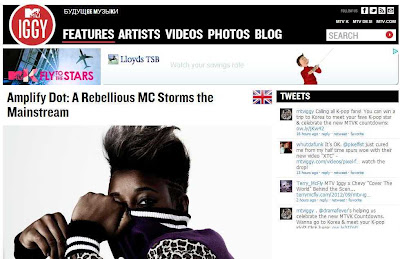 According to Amplify Dot, she was Born Ready. And do you know what? I'm actually a believer. Back when she was a young gun, the aspiring MC from south London was offered a once-in-a-lifetime opportunity to spit her heart out in front of thousands at a Missy Elliott concert during a mini talent show orchestrated by the legendary rap star. "One day, you're gonna be big," said Elliott, after crowning Dotty the winner. Now in her mid-20s, the Billboard-approved lyricist has turned said prophesy into a reality by solidifying her name in the UK urban scene as a ferocious bar-thrower, one whose untamable rawness and colourful lyrics have received high praise from the biggest of mic men and critics. Pop world—make way for a new rebel.


You’re currently in LA working on your debut album, yes? What made you choose that location as your base?

The majority of my album has actually been recorded in London, but I’ve been recording for like seven or eight months and we’re almost wrapped so I thought it would be cool to finish it by taking myself completely out of my comfort zone and making some music abroad. I lived in LA for a year when I was 18, and the sound out here is so different to anything else. The rap culture is so strong and the place has such a vibrant feel, it really is the perfect place to escape for a few weeks and make records. Last week, I sat down with Ron Fair at the top of Capitol Records tower in the middle of Hollywood – I seriously couldn’t believe my life. Plus, the temperature hasn’t dropped below 20 since I’ve been here. I just wanted a free holiday, to be honest.

Sounds like someone’s having fun [laughs] So what kind of album is it shaping up to be, and can you give us any hints on the title and who you’re working with on it?

The album is everything I wanted my debut album to be. I wanted a body of work that couldn’t be compared to anything. On the production side, I’ve gone with mavericks, rather than big names. The album sounds like a real journey. I’ve tried not to be repetitive so the pace and tone really changes as you go from track-to-track, but the beats bang from beginning to end. I could tell you the name of the album, but it’s already had three titles and I’ll probably change my mind again tomorrow [laughs].

You’ve already given fans a taste, with tracks such as Get Down and Kurt Cobain. Speaking of that Kurt Cobain number, is it true that you wrote it on the late Nirvana singer’s birthday? C’mon, Dotty, you can see why some people might find that kinda weird [laughs]. Please explain.

It’s not as weird as it sounds [laughs]. It was Kurt Cobain’s birthday in February 2012 and BBC2 were airing a tribute to him in the form of a documentary about his life, which was followed by a film loosely based on his death called Last Days. Last Days was the inspiration for the song, because it looked at how the rock ‘n’ roll lifestyle, which seems so thrilling, can actually pull the rug from underneath you. So, I wrote the hook: 'Speed through life in a purple haze/Live fast, die young, like Kurt Cobain.' The song itself is social commentary, with Kurt Cobain used as an analogy.

I’ve seen your independent grind first-hand and, over the years, you’ve definitely proven that you’re no slacker—even with little or no financial backing. Your hard graft was recently rewarded when Virgin Records/EMI snapped you up. How did the deal come about, and how does it feel to be that artist now?

The deal came about just after I put out my third independent release, Short Back And Sides – which did well on iTunes and caught the attention of one of the A&Rs at EMI. They invited me in to play some more of my music, and the first song I played was Kurt Cobain – a track I had recorded with my producer/pal, Krunchie, a few months prior. They just seemed to get it straight away. The president of EMI, Miles Leonard, said that deal had to happen and I was signed within two weeks. I think I’m fortunate to have been given the freedom to make the sort of music that I love, so I’m just enjoying the process of making my album on my terms.

Taking it back ten years or so, you were co-signed by one of your biggest idols: Missy Elliott. Was that a crazy experience for you?

Yeah, it was crazy to have one of my greatest inspirations give me their seal of approval. It was all so spontaneous and off-the-cuff. I just climbed on-stage at one of her concerts when she asked if anyone in the audience could rap, and I think I even surprised myself. June 1, 2001, I will never forget the date because it was the first concert I had ever been to. Missy did an impromptu talent contest in the middle of her show, and most of the other people who went before me caved under the pressure. I was just concentrating on not getting booed. Missy handed me her mic and I just spazzed out! Brixton Academy erupted. It was crazy! I obviously won [laughs], and I had a chat with Missy after the show. She told me that I was made for this, and I haven’t looked back since.

Much like Missy, you rock the mic hard! Do you think the mainstream music industry will be able to appreciate your rough-and-readiness?

Coming from the underground music scene, freestyles are what my name was built on – so the majority of people have only ever seen me barring in front of a camera. There’s a huge difference between spitting freestyles and writing songs and I hope that, as I release music into the mainstream, people start to see that there is more to me than just rough edges. But I am who I am, and I think the scene is ready for something a bit rebellious.

And over the next year or two, what would you like to have crossed off on your to-do list?

I broke my phone and lost my to-do list!