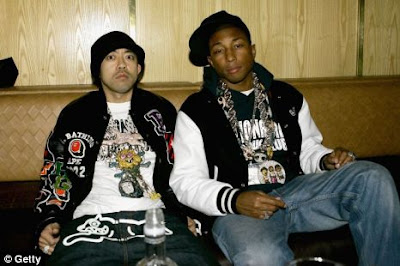 Hi Nigo! How are you keeping?

Hi. Not bad, thanks.

OK, first question. Can you give us a little history of how you got into designing clothes?

It kind of happened without my realising. I was very interested in fashion from a young age - from the first time I saw Run DMC on Japanese TV, as a schoolboy. I went to a famous fashion college, but I studied fashion editorial, not design. I was a year behind Jun Takahashi (UNDERCOVER) in college and we became friends. While I was still studying, I became a stylist and DJ and started to get some recognition. Jun and I were given a regular page to curate in a youth fashion magazine called Takarajima (which folded since then) and that was kind of the genesis of the shop we opened together called, NOWHERE. Jun was always a fashion designer from the start; I used to operate very much as a stylist: buying dead stock sneakers and vintage American college wear to sell in the shop. Jun encouraged me to start my own brand because it was getting exhausting going to America on buying trips. Those are the roots of A Bathing Ape and I have been fortunate that it hasn't let up since then. The success just built and whilst I still don't think of myself as a designer, it is the easiest way to describe what I do, I suppose.

You’re also a lover of music, aren’t you? You DJ and produce music as well, so how did all of that start?

As I mentioned before, at that time DJ/stylist was not a completely unheard of occupation. The clothing side became more successful, but I find the idea of one without the other quite strange. I have released a few records - the first ones were released in the UK on the Mo'Wax label and I have continued to make music.

Do you still have time to spin some records and make the odd instrumental every now and again, seeing as you’re so busy with fashion?

Honestly, it is difficult these days. The growth of the clothing side of what I do has brought quite a few responsibilities, so even if I personally feel a need to focus on music at any particular moment, that isn't always possible.

I’d like to know your thoughts on how fashion has changed since you started BAPE in 1993...

What we were doing has become much more accepted and normal. To the point that people sometimes take it for granted, as if it was inevitable that culture would evolve this way. There are good and bad sides to that: I have enjoyed the fact that we can affect the mainstream; but there used to be something special about belonging to an exclusive little club. Fashion, in the sense of magazines and shows, obviously changes very quickly and never stands still, but at the level of what people really wear in their daily lives, things are much more stable. The street of 2010 looks closer to what I wear than it did in 1993.

Japanese kids seem to have a real eye for fashion. Where do you think this come from?

People care about it. It isn't unusual to be very informed about trends and what brands and products are available. I think a lot of people here don't feel much pressure to look normal or to fit in, which maybe exists in many other countries. It's hard for me to assess really, because the way it is here is what I am used to. What people are wearing when I go overseas is more exotic for me, so I tend to notice that more.

You've teamed up with lots of characters from popular media, including Marvel, Hello Kitty, SpongeBob etc. What do you most enjoy or value about these link-ups?

I like characters. It is amazing for me to be able add my touch to a famous character. If I couldn't change them in some way, there would be no point for me.

What other fashion designers are you rating at the moment? I recently interviewed Carri ‘Cassette Playa’ Mundane, who had some very kind words to say about you…
I think it would be unfair to pick. I actually still see myself as a consumer and not some kind of judge who's above it all, so I like to be able to recognise one good piece in a collection I didn't really like, for example. There are a lot of good designers now. I like Carri, that's nice of her.

You’re the owner of Bathing Ape and you also work with Pharrell Williams on Billionaires Boys Club and Ice Cream too. But, which one do you prefer? A hard question to answer, I know…

Well, BAPE is older and it's all mine, but working with Pharrell is one of the most important things that has happened to me.

How is it working with Pharrell on BBC? Do you always see eye to eye on things?

Mostly we see eye-to-eye. I don't speak enough English for our relationship to work if we didn't ‘get’ each other already. The difficulties of communication in language sometimes help you to realise that differences of opinion aren't that important.

OK, talk to us about the recent closure of your store in Los Angeles. What was the reason for closing it down and do you think online will continue to be the best way to sell clothing?

It was a beautiful store and it we had a lot of hurdles in the way of bad luck to overcome before we opened it; so it was a difficult decision to close. The whole environment in LA really changed after the economy there crashed. The streets got a bit deserted and we found ourselves surrounded by empty stores. We thought it was better to close. As for online sales, you know, I was really reluctant to do it at first. I had a shop before I had a brand and I have always believed that I wanted people to see my products in a certain way, which is why I put so much energy into building amazing stores. I have been converted, though. I do think that one doesn't replace the other, though. I think each way of buying appeals to different customers and some things are easier to buy in a store than online. They both have a role.

Lastly, what can we expect from Nigo and his world of fashion and music in the near future?

I have just opened my first shops in China (Beijing and Shanghai) which is something I was working on for a while and has kept me pretty busy. Other than that, I am preparing new collections for BAPE, Mr Bathing Ape and Human Made.