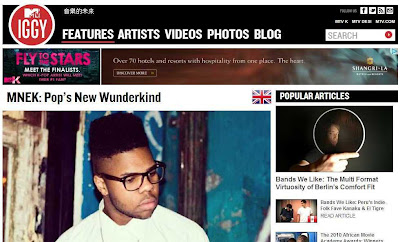 Where He’s From: London, England

Sounds Like: '90s soul with a modern pop twist

MNEK has brought a certain swag/urban edge to British pop that’s been missing for years. His voice is laden with soul; his songwriting skills is beyond his years, with a whole lotta substance; and his productions are simply genre-defying masterpieces. Basically, the kid’s single-handedly reviving the genre’s cool. "I’ve been doing music since 2004, and I pretty much taught myself," says the 18-year-old. "I signed my publishing deal with EMI in 2009 and, initially, I think I just believed my hype [laughs], but then I actually wanted to make great music."

Janet Jackson, Mariah Carey, Whitney Houston, Luther Vandross, George Michael, and Craig David are a few of the great singer-songwriters whose influence stuck to MNEK as he began to form his own musical identity. And much like the aforementioned artists, the London lad also caught the writing bug at an early age. To date, MNEK has written chart hits for the likes of The Saturdays, Misha B, Duke Dumont, and many others. While he will continue to pen for others, expect to hear a lot more from pop’s new genius as a vocalist in the coming months.