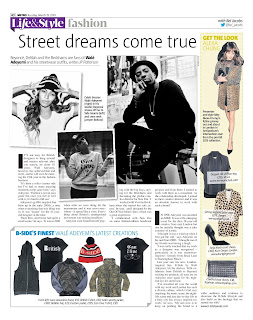 It’s not easy for British designers to hang around and remain relevant after one season, let alone 18 years. Walé Adeyemi, however, has achieved that and more, and he will soon be entering his 19th year in the fashion business. "It’s been a roller coaster ride but I’ve had so many amazing moments at the same time," says Adeyemi. "Fashion’s not an easy game but once you fall in love with it, it’s hard to fall out."

Adeyemi’s graffiti-inspired line blew up in the early 2000s, a time when everything that was bling was in. It was "insane" for the 41-year-old designer at the time. "Back then, streetwear had quite a small scene," he says. "It was in 2000 when what we were doing hit the mainstream and it was seen everywhere – it spread like a virus. Everything about Britain’s underground movement was making headlines."

Adeyemi soon found himself playing with the big boys, styling for the Beckhams and becoming the global creative director for New Era. ‘I worked with Victoria Beckham when she started her solo career,’ he says, "and I designed for the Out Of Your Mind video, which was a great experience. I collaborated with New Era on some limited-edition headwear projects and from there, I started to work with them as a consultant. As the relationship developed, I joined as their creative director and it was an absolute honour to work with such a brand."

In 1998, Adeyemi was awarded an MBE. It was a life-changing event for the then 28-year-old creative from east London but one he initially thought was a joke courtesy of a mate. "I thought it was a wind-up when I first got the call," says Adeyemi on his nod from HRH. "I thought one of my friends was having a laugh. I was really touched that my work as a designer was recognised – particularly as it was streetwear-inspired – literally from Brick Lane to Buckingham Palace."

Last year saw his new, London-inspired line, B-Side by Walé Adeyemi, hit the shelves. With celebrities from Delilah to Beyoncé rocking his products, all eyes are on Adeyemi once again for his high-end eye for streetwear. "I’ve travelled all over the world with my work and London has such a diverse culture, which I find very inspiring: the music scene, the nightlife scene and just day-to-day life in a busy city has always inspired my work," he says.

"My aim now is to keep on pushing the brand to a wider audience and continue to showcase the B-Side lifestyle and also build on the heritage that we started out with."