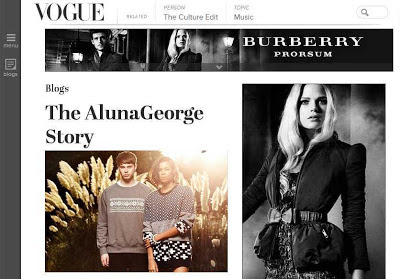 THE UK has never birthed any credible contemporary R&B duos worth talking about – until recently. London's Aluna Francis (vocals) and George Reid (music), better known as Island Records' AlunaGeorge, have created an infectious sound that has allowed R&B and electronic music enthusiasts to unite in perfect harmony, causing the music industry to rejoice.

Aluna's chirpy soprano matched with George's hip-hop-tinged, electronic-pop productions marry together so well you'd almost think they were making music for each other. But no, this relationship is strictly (beautiful) business. The pair first met through social networking group MySpace.

"I emailed Aluna's old band, offering to do a remix for them and they accepted," says Reid. "It all turned out quite well and they asked me to do some writing with them for their second album. That was how we got to know each other, really."

As a young, aspiring singer, Francis drew inspiration from most of the artists in her mother's CD collection, namely Etta James. But her mesmerising voice is so unique to her that you’d find it difficult to compare her to any other artist. And, love it or hate it, it’s one guaranteed to make you take a second listen.

But when it comes to George's beat-making skills, he has already been likened to hip-hop heavyweights, Timbaland and Pharrell Williams. While he’s grateful for his work to be mentioned in the same sentence as said greats, he simply describes his productions as "basic hip-hop beats, with Aluna singing over it," adding: "I always try to make something that sounds unique to me with the sounds that I'm using, and it’s that simple."

When the duo released the video for You Know You Like It online last year, it was at that moment their lives changed forever. AlunaGeorge released a critically acclaimed EP of the same name a few months later to widespread critical acclaim and now they have a new EP, Your Drums, Your Love, doing the rounds. But what can we expect from their debut album?

"Some of the singles that we've already put out, some down-tempo waltzes, some meandering beats-based tracks and some big, odd, off-kilter bangers," explains Francis.

Originality in R&B music is hard to come by in this day and age. If artists aren't jumping on a crappy Euro-dance beat to gain an unauthentic mainstream audience, then they're getting dropped by their record labels for not being mainstream enough. Thankfully, AlunaGeorge are proudly taking R&B into the future and their label seemingly respects their creative flair.

"In some ways, we're starting from scratch. Any appreciation we get is a surprise," says Francis. "I have no idea if what we're doing is what people want to hear, but the response that we've had so far has been absolutely amazing! I guess we'll have to wait and see."