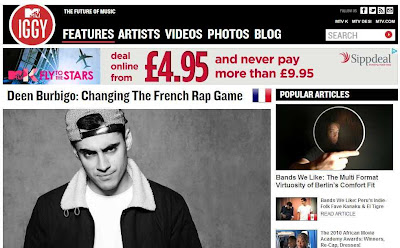 Where He’s From: Marseille, France

For Fans Of: Nemir, Blackapar

Hip-hop is a universal language and, regardless of which native tongue rhymes are delivered in, it’s a genre where emotion is easily relayed. Deen Burbigo is a rapper hailing from Marseille, France, and for him to switch his bars to English would just be "whack." "My native tongue is rich enough for me to dig into, and it’s the language I handle the best," says the 25-year-old. "I did write one or two verses for fun when I was in New York City, but I’ll never perform them in front of a camera."

Burbigo began penning raps at the age of 16, drawing influence from French crews such as IAM and Fonky Family, as well as hip-hop heavy-hitters like Wu-Tang Clan, Nas, Jay-Z, Mobb Deep and Boot Camp Clik. And now, he finds himself amid a thriving hip-hop scene in his hometown. "A new wave of MCs have been using a refreshing approach, and that’s not just in Marseille and Paris," says the former battle rapper. "A few old-timers are coming back, too, so there’s some healthy competition right now."

Deen Burbigo is preparing his currently untitled debut LP for a 2014 release, with the first single and video dropping this September. But until then, find him spreading the French rap gospel all over the land with his L’Entourage.