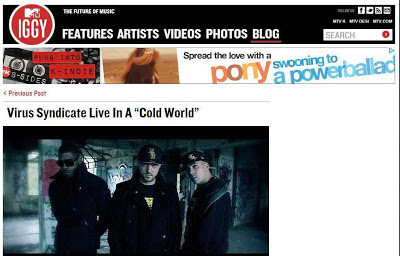 We live in a cold, cold world, and the financial climate is getting chillier by the day. The recession has hit every country in some way or another and, in my very humble opinion, it's the young people who have been hit the hardest – with higher university fees, lesser job opportunities and house prices sky-rocketing. Manchester’s dubstep and D&B outfit, Virus Syndicate, tackle said issues in their new Document One-featuring single, Cold World.

Nika D, the group's central MC, tells MTV IGGY: "We’re living through times of high unemployment cutbacks and recession. England is changing, and not for the better. "Cold World" is an example of what our British youth are faced with in today’s world." The track: anthemic. The video: cinematic. Big words, I know. If you don't believe me, see for yourselves…