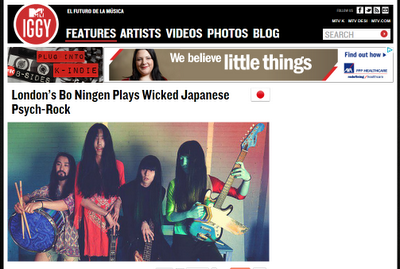 Where They’re From: England via Japan

They may live in London and sing all of their music in Japanese, but that hasn’t stopped Bo Ningen – which, in English, means ‘stick men’ – from gaining an army of dedicated UK fans, and receiving great reviews from the British press. Speaking on how they all met, the band’s guitarist, Kohhei, tells MTV IGGY: "Me and Taigen were playing in other bands. We once played the same bill, and we sort of sensed something. A friend of Yuki knew Taigen and introduced each other around the time I met Taigen. Three of us, and Mon Chan, also had a friend in common. The first time all four of us were in a studio was a few hours before our first gig, and that was only the second time that I had met Mon Chan."

Kohhei (guitar), Taigen (bass, vocals), Mon Chan (drums) and Yuki (guitar) are four long-haired rockers who look as though they’ve just come straight out of the mid-1960s, but their psychedelic rock sound couldn’t be more current. "The only reason why we call our music 'psychedelic rock' is because it’s a very open term: jumping, crashing and invading territories/boundaries to produce a certain dynamic is what we class as psychedelic," explains Kohhei.

The energy at Bo Ningen’s live shows almost counts out the fact that you don’t understand a word they’re singing, which is kinda weird and cool at the same time. "Even though the language is different, you can deliver so many things – emotion, for example – in the form of music," says Kohhei. "As we speak English, people can come and talk to us if they want to know what a song means." For those too shy to ask for a song’s translation, fear not, as some English-singing music is currently being prepared by the band.

After receiving critical acclaim from respected indie/rock music platforms for their debut, self-titled album, Bo Ningen, these rockers have a lot to live up to with their new LP, Line The Wall. “The new album is very different to the last one, in so many ways," Kohhei tells us. "We’ve developed the way that we structure our songs, and also the sound itself – even if it might not be very obvious. We’re presenting a new form of psychedelic rock music, and we just want to keep on renewing and rewriting the history of it to see what we cannot see right now."