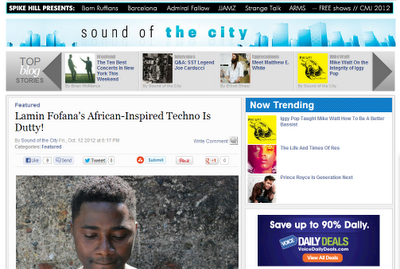 
Dutty Artz, the independent record label based in NYC, certainly knows a thing or two about nurturing talent from a grass roots level up. Ever since Matt Shadetek and DJ Rupture started it up in 2008, the label has released left-field grime, house and techno to bass music lovers across the globe. Already a respected name within the industry, Dutty Artz's latest signing is about to give them some extra kudos. A protégé of DJ Rupture, Sierra Leone-born Lamin Fofana is producer and DJ whose African-inspired techno is already adding another edge to ever-growing "EDM" scene. From the age of 15, he began programming rhythms and designing sounds using cracked software, something which has helped mould his sound into what it is today.

From listening to Fofana's music, it's clear he has been influenced by a wide range of musical genres--from American hip-hop to UK grime, and everything in between--but he would later look elsewhere for inspiration. "As a kid, I listened to my parent's record collection, which was a variety of 1960s state-sponsored jazz, dance music from West Africa, Congolese music, 1980s pop, and so on," explains Lamin. "Growing up in the late 1990s and early 2000s, I listened to a lot of hip-hop and R&B. I listened to the radio a great deal: WPGC in Washington DC, and Hot97 in New York City. I also listened to a lot of obscure records, experimental electronic music, Chicago house, Detroit techno, and garage and grime from London."

He continues: "At some point in my late teens, though, I found myself increasingly disappointed and unable to relate to a lot of contemporary hip-hop and R&B, and a good amount of electronic music, for that matter. It was all so fleeting. That just pushed me to dig deeper, and I've been searching and finding new, exciting sounds ever since."

Lamin Fofana's new EP, Africans Are Real, contains many sounds found in Africa. However, it wasn't something that he purposely set out to force on his listeners. For him, it was just the natural thing to do. "I don't think it's important to incorporate African elements in my music," he says. "What's more important is knowing who you are and where you're from. The bulk of the music I make may have nothing to do with my background: where I grew up, my age, education, sex, etc. When I make music, I ignore everything: all the noise around me, identity, baggage, etc. I'm not following any formula or blueprint. If you hear African sounds in my creations, it's something that happens naturally, or subconsciously. It's just who I am."