BlackBook: How To Dress Well Makes Through-Provoking R&B That Stands On Its Own 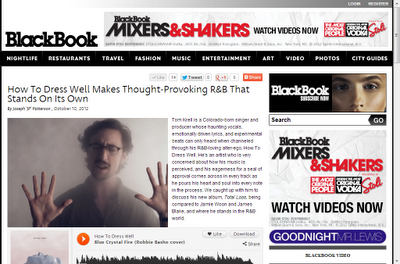 Tom Krell is a Colorado-born singer and producer whose haunting vocals, emotionally driven lyrics, and experimental beats can only heard when channelled through his R&B-loving alter-ego, How To Dress Well. He's an artist who is very concerned about how his music is perceived, and his eagerness for a seal of approval comes across in every track as he pours his heart and soul into every note in the process. We caught up with him to discuss his new album, Total Loss, being compared to Jamie Woon and James Blake, and where he stands in the R&aB world.

How To Dress Well—interesting name you’ve got there. How did you come up with it?

When I first starting recording music, I was filing it away in my laptop at a friend's house. iTunes asked for a name, and there, on the coffee table, were two old books my friend had copped from the bookstore below our flat: How To Photograph Women Beautifully and How To Dress Well. I just picked one, and, since then, everything I've recorded has been filed under that name. I can see how some people would find it off-putting or arrogant, but it's definitely not intended to be. It's really just a random name.

Random, but cool! As a youngster growing up, which musicians did you draw influence from as you were finding your musical feet?

Like, as a kid, kid? I’d say Michael Jackson, Tevin Campbell, and so on. But then it's like Brian Eno, Grouper, Feist, Kate Bush, Babyface, Mount Eerie, Nine Inch Nails, Antony, The KLF... Yeah, I’ve been into a lot of different shit.

And you would describe your music how?

Regardless of what genre it’s closest to, I consider HTDW spiritually experimental music. The voice and harmonies are the foundation.

You’ve been compared to the likes of UK crooners, Jamie Woon and James Blake. What are your honest thoughts on that?

Some comparisons are a bit knee-jerk. I mean, most of them I can certainly understand. However, I do find my music to be more in the plane of Maxwell, Tracy Chapman, Grouper, and Kate Bush, rather than Woon or Blake.

Thanks for clearing that one up! It seems many artists today are almost afraid to put themselves under the R&B bracket, but you don’t seem to mind. What do you think you bring to the genre that is, perhaps, currently missing?

Well, I'm not too quick to place myself under that bracket, either, but I do love a very wide range of R&B artists. And, to that genre, I hope I can bring something thought provoking and heartfelt. I do think that pop-R&B often misses those elements.

Although you released music before 2010’s Love Remains album, that particular LP got the music world talking a lot. What was it about Love Remains that you think people connected with so much?

I'm glad that a lot of people connected with it. It's an album about melancholy, and the goal was to portray melancholy, not simply by singing about it, but actually trying to present the affective terrain of melancholy sonically. I think people heard, understood, and felt that intention.

Tell me about your latest project, Total Loss. What was the thought process behind this album?

It's an album about mourning: mourning the loss of loved ones, love, faith, desire, and hope. And when I say mourning, I mean coming to grips with loss, not getting over it—as I do feel like that's an impossible task, particularly with death—but learning to live with and grow from it.

Very deep. Alright, honestly, do you feel that the mainstream’s ready for what you’re about?

Man, I really don't know. I mean, I hope so! I genuinely do. I would love for more people to listen to and find solace in Total Loss.

On a totally different note, who are you listening to right now? Anyone out there who you could see yourself working with down the line?

Right now, as we’re speaking, I'm listening to And You Will Know Us by the Trail of Dead [laughs]. I was listening to Jeremih before that. Collabs are super exciting, and I hope I get to do some sick ones, but I'm more looking to work with artists, filmmakers, etc.

You’re already off to a great start, but what are your hopes for the future?

I hope these upcoming tours go well, and that people can take something special away from the shows. I want to record, record, record! I'm constantly writing new music. I also hope that I can live fully and love, be in love, and be loved for the rest of my life.

This also appeared over at BlackBook: H E R E