MTV IGGY: The Original Rudeboys Are Reppin' For Dublin 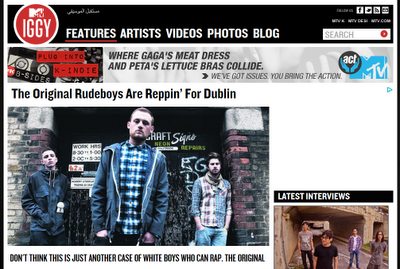 Neddy, Sean and Robert make up The Original Rudeboys, a trio coming straight outta Dublin, Ireland. With influences ranging from Kanye West to The Smiths, the all-singing, rapping, guitar-playing outfit have combined elements of indie and hip-hop music to create a strong sound all their own. They may have millions of YouTube views, thousands of fans on Facebook and Twitter, and have supported Game, Sinead O’Connor and Professor Green in their time, but they’re still unsigned. For The Original Rudeboys, though, it’s all about having full creative control and the freedom to make the music that they wish, without having a major label big-wig dictating what musical message they can and cannot share with the world.

Firstly, where did you guys come up with the name, The Original Rudeboys? It’s definitely original, that’s for sure…

Neddy: We took the name from a T-shirt I had been wearing before we were an actual band and when the band was formed, we just kinda stuck with it. We were aware that rudeboys were more associated with ska music, but we didn’t want a stereotypical name that would associate with the music that we make.

You’re clearly heavily influenced by indie and hip-hop music, so what artists – both past and present – have inspired your work today?

Sean: As kids, we were all heavily influenced by hip-hop, from the likes of Kanye West to Biggie and Tupac. When I got a bit older, I worked part-time with my dad and he would play a different CD in the car every single time. This is where I found out about The Cure, The Smiths, The Doors, The Dubliners, The Who, etc. This music took me to a different place, with the instrumentation and the lyrics, and that’s why my music taste is so diverse and I think that the three of us [The Original Rudeboys] are the same. We don’t to be boxed in when it comes to our music.

Robert: Along with hip-hop, I also listened to a lot of The Dire Straits and The Eagles. Over the last few years, big influences have been John Mayer and James Morrison – they’re fantastic songwriters.

From looking at your online presence, you seem to have a very large and loyal following – yet you’re still unsigned….

Sean: I think a lot of it is down to being regular lads. People like to root for the underdog and they can relate to what we are saying in our music, because it’s everyday stuff. Also, we are always up for having conversations with fans and always interacting, and social media helps us hugely with that aspect.

Neddy: We’re working with an independent label at the moment who gives us the freedom we want when it comes to making our music. We’ve been approached by bigger labels that had different ideas for us as a band. We weren’t cool with those ideas.

Robert: We love the fact that we can chat online all day to our fans. We really owe it all to them. We’ve got this far and hopefully we can continue to go forward with the never-ending support.

You’ve played at a lot of big gigs in and out of Ireland, but what has been your favourite place to perform at?

Sean: I have three very vivid memories of gigs I really enjoyed. Our first ever gig as a band was my first ever time on stage, and to have a crowd of people sing the words to our songs and respect you so much was a great feeling. Five gigs later, we played Oxegen, which was our first time at such a big festival,  where we performed on the second biggest stage. The experience was fantastic! We also supported Sinead O’Connor, where we['d] done a completely acoustic set in front of about 1,400 people – they sat silently and listened to every lyric, start to finish. It was a beautiful gig.

Neddy: For me, it’s pretty much any gig with a good crowd. It could be a festival in front of thousands, or a small club in front of thirty people. Once the crowd is feeling it, you can fall into the set and enjoy it with them.

Robert: I love playing in front of people who don’t know us and winning them over with our music.

Speaking of Ireland, what’s the music scene like there? Have you found it difficult getting your music out to people living outside of Ireland?

Sean: There are some extremely talented artists coming out of Ireland at the moment, and there seems to be a buzz around Irish music for the first time in a long time. It is difficult for a new band to get played on the radio and stuff, but the support has been phenomenal and we can’t thank the radio stations, both locally and nationwide, enough. With YouTube, it’s easy to get your music to anywhere in the world, and we’ve found that we have fans from everywhere just by the comments on our Facebook and Twitter.

Neddy: From gigs we’ve done outside of Ireland, we’ve got a great response from our live set. Our rise in the Irish music scene, as a band, is unheard of. Usually, it’s an uphill struggle to get heard. There’s some amazing talent in Ireland who deserve to be heard, but the media and radio stations aren’t hugely keen on showcasing what is on offer.

Now, this is totally unrelated, but what did you guys think of the BBC Three show, Irish Rappers Revealed? I thought it was great to see so much people showing such a hunger for hip-hop music in that part of the world….

Sean: Yes, but I also think it showcased a very negative part of Irish hip-hop. There are a lot of talented artists in the scene, like, Maverick Sabre emerged from it and I think the documentary took the wrong angle in the way it was recorded and put out.

Neddy: I personally know a couple of the lads featured in the show who weren’t happy with the portrayal of Irish hip-hop. Personally, I think the filmmaker went to these artists with opportunities to showcase their talents and made an axe job of it turning it into a joke or comedy documentary. While a few talented MC’s were featured in the film, there is so much more to Irish hip-hop that wasn’t showcased, which is probably a good thing.

Although there are three of you, people have compared your sound to the world’s favourite ginger, Ed Sheeran. What are your thoughts on that?

Sean: We’re all huge fans of Ed and we’ve been lucky enough to work under the same producer, Jake Gosling. I think our sound is completely different, but it’s always good to be compared to one of the biggest artists in the world right now.

Okay, so what exactly is your sound?

Sean: As I said before, we don’t want to box ourselves into one category. As a trio, we want to experiment and push the boundaries a bit, and that comes across well at our live shows when we switch it up a lot, with the live band and stuff.

Neddy: At the beginning, we were indie-acoustic-hip-hop. But I think after creating our first album in a studio, with endless instruments, our sound is so much more now. It still has the strong elements of indie-acoustic music, but there’s a lot of singer/songwriter stuff on the album.

Tell us about your new EP, Written Songs.

Neddy: We were scratching our heads thinking, ‘What will we release next?’ It was around the same time that we were selling out our first big headline show, and summer had also just started, so it felt right to go with an upbeat, feel-good song. Besides the single, there are three other tracks on there: a remix of “Sunny Days”, which features the talented Fem Fel; a cover of Gnarls Barkley’s “Crazy”, which is dedicated to one of the lads’ ex-girlfriend; and also a fan favourite— “Dublin Days,” which is a song about loving the place you’re from, but at the same time wanting to get away from it all.

What else do you have coming up in the near future?

Sean: As a group, we’re hoping to take this sound outside of this country and see what other people make of it. We have a lot of gigs planned, and we have a lot of new material written for the second album. Our debut album, This Life, is available to grab now. All of the information is on www.theoriginalrudeboys.com, for anyone interested.