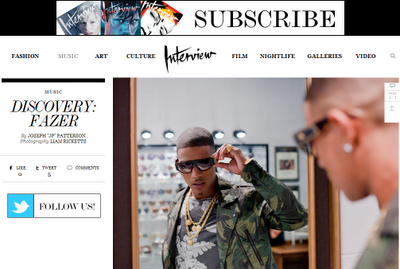 "I'm sure at some point, in the not too distant future, N-Dubz will be back together," says Fazer, when asked about re-joining the group that initially garnered him notoriety in the UK. N-Dubz were one of the UK's biggest selling urban/pop collectives, selling millions of records during their twelve active years. But last year, Fazer, Tulisa, and Dappy decided to part ways to pursue their individual music dreams. Now that he's going it alone, Fazer—real name Richard Rawson—combines his proven, deep vocals with enough energy and style to ensure that he can outlast the group's legacy.

FIRST MUSICAL STEPS: It was at secondary school, with Dappy. His dad had a studio, and we wrote our first song there and kept going until now. The inspiration was Uncle B, too—definitely. It's been a crazy journey, full of life experiences, music experiences; and production-wise, I'm always learning new things and keeping an ear out to progress my music. Lyrically, my inspiration has always been what's around me—I only write about what I know, from "Killer" to bars from N-Dubz's tunes, it's always based on what's happening in my life or around me and I think it's important to stay true to what they know.

ON OFFER: My music is versatile and alternative. There's a load of different sounds on my upcoming album, there's definitely something for everyone—I wouldn't put it in a box of just one sound. In my years as an artist and producer, I've worked with so many genres and sounds and, as a producer, I'm always about trying new things. I like house, I like dance, I like rap, R&B, I just like loads of different sounds, and it's all evident in my music.

ON GOING SOLO: Sometimes, I look to my right—no one; I look to my left—no one. So it can still feel weird. It's exciting, though, and it's good to express myself, the Fazer way. I've done a few shows, Urban Classics and Majorca Rocks, and it's mad dominating the stage by myself but, at the same time, I love it and I enjoy it. I think it's natural to feel weird because I've been performing with them my whole life, but the same can be said for being in the studio without them.

UP HIS SLEEVE: It's my time, but I'm not sure people are gonna be expecting what's coming—and I like that. There's a few parts to me that I don't think people recognized before, like, I'm heavily into my fashion and I'm producing for loads of artists that I don't think people would have expected, but that's the fun part. There were no expectations, so people can now expect the unexpected.

ON NEW SINGLE, "KILLER": It's about heartbreakers, there are times where things get heavy between a guy and a girl. One starts acting too serious and the other just wants to do their own thing and they become a heartbreaker and a love-killer. I think a lot of people can relate [laughs]. I hope it's an eye-opener for people to take note. I didn't feel like there were expectations from me coming from N-Dubz, so I just hope people like what I'm doing and appreciate getting to know Fazer through my music. The support so far has been incredible and we hit one million views on the video in a week, so that was crazy. I just hope that people like what I'm doing and continue supporting.

FAZER'S FUTURE: I'm finishing off my album, and will obviously be releasing more solo material. I just want to enjoy it, push myself, evolve and hopefully increase my fan base along the way—with a big tour somewhere in there. We're going to branch internationally as well, that's a massive desire of mine, as well as working on collabs through my new production company, Sky's The Limit (STL). It's gonna be a great ride.