The Voice Newspaper: SAVE DA SLANG! 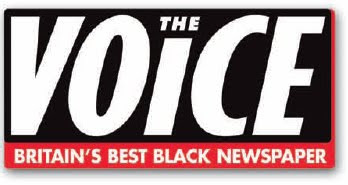 JOSEPH PATTERSON defends the use of slang terminology and dismisses the suggestion that the language is associated with gang culture.

WHAT comes to mind when you think of slang? Gangs? Surely not. Mind you, if readers were to believe an article that recently appeared in the Evening Standard, they'd think that slang - which the writer, Lindsay Johns described as "often impenetrable and indecipherable" - is more likely to be associated with those who are either in a gang or affiliated with one.

Unsurprisingly, the article entitled The Secret World of Gang Slang caused considerable uproar. One reader commented: "This article is utterly misguided". Another stated: "People of all places and backgrounds have their own slang words – let's not make out like there’s some sinister connection between slang and gangs.” And one reader felt that associating slang with gang culture simply perpetuated an “us and them” culture between young people and middle England.

What sparked particular outrage was the article’s inclusion of an image of 17-year-old Marvin Henry who was shot dead in north London last month, in what the piece described as a ‘gang brawl’. The article went on to claim that the R.I.P notes that were left for Mr Henry stood out because they were ‘peppered with words such as ‘liccle’ and ‘peak’ – street slang terms in common usage among London’s gang culture’.

Frankly, when I saw the headline, I suspected the article was going to be negative. After reading it, I could only conclude: what an uninformed waste of typing. For anyone to even mention gangs and slang in the same sentence is an abomination to youth culture.

Someone that supports the use of slang and who actually knew the late Marvin Henry, is music producer/singer, Goldielocks. The Croydon-based musician was fuming when she read the article online. “Marvin was a regular attendee at a youth project I run in the area,” she told The Voice. “We all cared for him a lot and knew he was a respectful and ambitious young man. He had the usual arguments with people in the area, but what teenage boy doesn’t? He was definitely not in a gang and his passing has deeply affected me, his friends, his family and the whole community.

“Young people find it very hard to express their feelings honestly. For them to then be taken apart in the press… it’s just so destructive. It gives the reader a sense of ‘us and them’ which needs to be stopped.”

In the UK today, slang terminology is used in everyday conversation amongst people of all ages and all ethnicities. I’m 22 years old and I use slang; all of my friends use slang; I even know 30-year-old white professionals that use slang in their everyday speech. Are we all reppin’ a gang in our ‘bits’ (area)? Of course not. The reality is, the use of slang can turn the most ‘neeky’ (nerdy) person into a truly cool commodity.

As a white female, Goldielocks doesn’t believe there is any colour barrier when it comes to using certain street slang. Furthermore, she feels it’s something that everyone should be embracing.

“Who says that slang is limited to the use of gang members and violent people? I’ve luckily had a great upbringing, never been involved in any violence and I use slang every day. We should celebrate the colourful use of the British language, in the same way we do with cockney slang. The more articles that are written like that one just serve to put the blame on young people for everything and make them feel even more excluded from our communities.

“I love that people can make up words for things, or take the multitude of cultures and mash them into a universal code. It's creativity! It’s funny to find out what the newest words are and it gives us a sense of belonging and individuality in what is becoming a more and more corporate and middle-class run country.”

To celebrate the use of slang, grime MC P Money is gearing up to release his new single, Slang Like This next month.

“I think they're twisting things,” he said of the article Evening Standard’s article. “I think they're looking at things from behind a desk, instead of actually going to see what people are really like in the communities around them.

“My little brother will be 11 soon and he uses slang words. He tells me everyone in primary school knows and uses slang words to a certain extent and I doubt they're gang members [laughs]. It's just something that's been passed down and around. Most slang words are just a quicker way of saying things.”

He continued: “That article is exactly the reason why I say in my track: ‘All the suit wearing guys in cities can't stand us; they don't understand us, when we speak in slang like this.’ I wanted to make a track that everyone could relate to or sing along to.

“Slang is now in so many communities. People of all ages use most of the slang words mentioned in the track and love the song because of this. It’s all about bringing people together, different ages and backgrounds.”

Thankfully, the offending article did include some pro-slang sentiments. Deborah Sathe, producer of EastEnders youth series, E20 said: “Young people’s slang is poetic… Not all kids who use slang are criminals.” I couldn’t agree more.

Lindsay Johns, please take this as constructive criticism. It wasn't purposely written to ‘par’ (disrespect) you.