MTV: Wrap Up And Watch Out - Luke Bingham 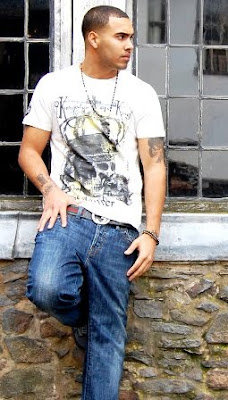 My name’s Luke Bingham and I’m a singer coming straight out of Leicester. I remember being around music a lot when I was growing up, my father was a musician and a singer, he inspired me enormously and he gave me the confidence to sing. I used to listen to a lot of Michael Jackson and I still do to this day! As I got older, I listened to a lot more of Stevie Wonder and Lionel Ritchie. I was very much into the R&B sound and loved the way the songs were performed. Currently though, I'm inspired by artists like Trey Songz and Drake, they're the new breed of artists today and I hope one day to follow in their footsteps. At home we would always have music playing and when I was young, I would dance and pretend to be a pop star, but I never really realised that I wanted to sing until I left school. When I did know that I wanted to sing, I then enrolled into a music production course and started to learn the basics. This is where I met a good friend of mine who produced hip-hop and R&B, we worked well together and his music moved me to write contemporary style songs. We still work together sometimes and I think good creative chemistry is hard to find these days, so I hope that good influence will be around me always.

Growing up, I connected with R&B and it is the basis of my style today, but I do feel that music is my outlet and I can express myself on most genres. I don't ever want to be restricted to one genre, as I enjoy singing on so many. I’ve had to be very versatile to find the right sound that works today. This is hard work! I've had to reshape my singing style, sometimes to fit electro/pop or even a live acoustic performance, but fits mainly under R&B/pop.

London is the place to be and I can’t deny that, but I feel that I’ve been lucky to develop as an artist without all the hustle of a fast flowing music industry. There has been many times that I’ve nearly fallen off track and it’s been the positive people around me that have helped me correct my course. I think London has many opportunities and options to move forward as an artist and I feel that I’ve come to the point in my career where I’m ready to accept the challenge of succeeding in the London music scene.

2010 has been a really great year for me; getting signed to Insatiable Music has pushed my boundaries as an up-and-coming artist, to a credible artist with a chance to make it. Although, the work is just about to begin. In December, I have a two-week club tour booked up in London's top clubs, plus I’m currently doing a lot of shows around the UK on various dates. In 2011, I just hope to take my performance to a new level and reach out to a wider audience. I’m also looking forward to releasing more of my new material; I have my second and third singles lined up to be released with videos to be shot soon. Next year is definitely going be an exciting year for me and I hope to push myself harder towards success.

Stay up to date with Luke Bingham on Twitter