MTV: Wrap Up And Watch Out: S-X 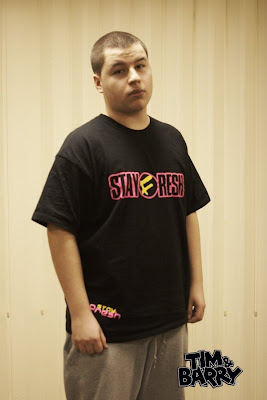 Last week our Wrap Up And Watch Out was all about R.I.O from Manchester and this week we’re just around the corner while we talk to a producer from Wolverhampton called S-X...

My name is S-X and I'm a 17 year old music producer from the Wolverhampton. I started producing music at around 11 or 12 and I’ve been working hard at it ever since. I’ve worked with StayFresh, Trilla, Marvell, JME and more and I’ve also worked with some big US producers. I'm all about making good music and one day changing people’s lives musically.

Well, I remember I used to play instruments back in primary school, so I was always into music. My brother helped a bit too because he had decks and used to mix at home and stuff, so I would watch him do that. Then in high school I found out that you could make beats on a laptop, so I got Fruity Loops 3 and I've just been working hard ever since then. My main inspirations today are the positive people around me and everyone doing something constructive and worthwhile with their time. When I see people working hard, I respect that and it makes me want to work even harder.

I don’t know what to call it really. I mainly produce hip-hop, so that I guess, however I’m going to call it S-X music, because that’s what it is [Laughs]. Everyone tells me my music sounds totally different to other stuff they’ve heard, so yeah, it's S-X music from now on.

Yeah it is pretty hard being living outside of London; in fact it’s really hard to be honest. You've just got to work hard, connect well, but that can be hard too because you can’t go into a club and see Skepta and be like, “Oh I’m such and such from this place. Can I give you my CD blah, blah,” because they probably don’t want to know. It’s about being in the right place at the right time and prove that you’re really dedicated to the music, but I guess if your music is good and you know how to market yourself then you should get out there pretty easy.

My plans for this year are to build up my name and sound in the UK. I want to work with as many people as possible and get a few big album placements. I finish college in 2011, so I’m going to try and move to America, because I'm not planning on going to Uni. I've been working and connecting with a few big US producers and they're really liking my stuff and helping me out a lot, so we'll just see what happens. You know I'm going to be back and keep you guys updated!

Stay up to date with S-X on MySpace and Twitter

A version of this appeared over MTV: HERE