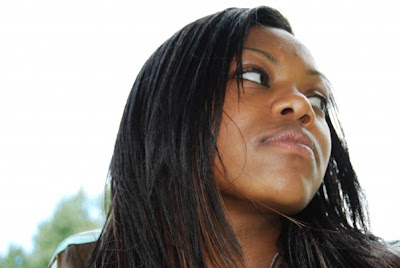 21-year-old Lady Leshurr is the next female to take on the male-dominated scene of grime. The MC/singer/actress has been a busy lady, building her fanbase over the net via her Twitter etc., and it's seeming to be working in her favour thus far. "I want people to acknowledge my talent, as well as respecting that fact I’m coming from Birmingham and building up my status by working with well-known artists around the UK."
Leshurr stars in new street flick 1 Day, in which she plays a frustrated baby mother to the main character, Flash (out nationwide on November 6). Whilst she awaits her next film role, the Birmingham-born spitter says: "I have a few exciting things coming up at the moment, one being my album - 'Every Little Counts' - which will be released early 2010 and features the likes of P Money, Dot Rotton, Mz Bratt, Lioness and more. In the meantime, I am releasing two mixtapes, 'Cake' and 'Coke' - one being the sweet side of me and the other is the fizz to match my sharp lyrics." (JP)

A version of this appeared in RWD Magazine
Posted by Joseph 'JP' Patterson at Friday, November 20, 2009