i-D: How I Fell In Love With Grime

I grew up in a strict, Pentecostal household. A real-life son of a preacher man, I knew nothing else but the church. Although we never got to enjoy the "things of the world" like everybody else - which may have caused my rebellion, later on in life - coming from that strong Christian background is something I value to this day, and will continue to value. But when I say strict, I mean S.T.R.I.C.T.

At no time at all were we allowed to listen to "secular" music in the house. Even if we tried tuning our radios to Choice FM to hear Uncle Jigs (my dad's brother) play soul classics, we knew what the consequence would be: "A good clout round the ear," as pops would say. Shit got so real, that, at one point during my childhood, TVs and cinema trips were completely banned as they were deemed prime entry for Satan, "the wicked one", to take over our mind, body, and soul.

I loved the Pentecostal ways of doing church, and still do - I've actually started going back to my dad's one ­- but they had no chill in the 90s with their rules and regulations. That never stopped my big sis, Joy, from sneaking Right On! magazines and R&B cassette tapes into her room, though. I used to kick it with Joy all the time and, on most days, before dad came home from his painting and decorating jobs, we'd listen to the gospel-inflected sounds of Jodeci, Monica, R. Kelly, Aaliyah, Mary J... all the R&B greats—on headphones, of course as mother was still in the vicinity. Joy wasn't too hot on hip hop, but my big bro definitely was. Joel was a rebel. The original roadman. Gold teeth, Moschino, mopeds—he was the guy and I idolised his every move. Any interest I showed in that lifestyle, though, he would shut it down instantly. He wanted better for me. 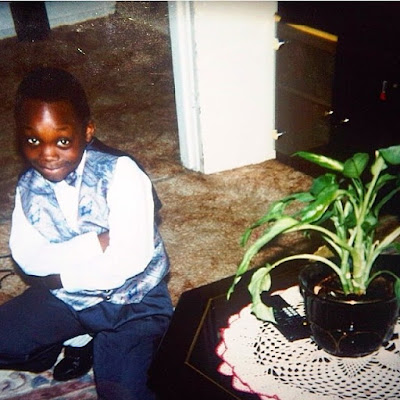 Joe was also a local rave MC, flowing under the moniker Flego, and was all over the jungle and garage scenes. He was forever spitting double-time bars around the house to the point that mother dearest thought he was losing the plot, bless her. Unbeknownst to me, then, my brother gave me my first glimpse at the future of British music, of what would become a phenomenon that spoke to, and for, millions of young people. He was slick with the rhymes, too, and I know this sounds super-biased cos he's fam and all, but he could've gone through with So Solid, Heartless Crew and them quite easily, had he had some direction. The truth of the matter is, he didn't, and was far too occupied with the street hustle and bustle for that to ever happen.

Music has always played a big part in my life. Everyone in my house could sing; even my rude-boy bro had some soulful runs in him. But a career in music, on that level, was never something any of us ever considered. A month before my 13th birthday, in 2001, that same house got split in two: my parents divorced and my heavily pregnant mother and I relocated to Wellingborough, a small town in Northamptonshire two hours away from Stockwell, South London, where I had previously lived. Upon arrival, WB was as foreign a land to me as Prince Akeem in Coming To America. There were loads of old people, not many black, and I didn't see any kids hanging out on the blocks like I was used to. That was, of course, before I discovered the hood, half-a-mile from where I was living.

A few months passed and we were offered a council house in the Queensway area of the Borough, which was right near my new school: Weavers Secondary. That's where I met cool and the gang. A week or so after joining, I made friends with some of the local lads who just so happened to do bar-for-bar relays at break and lunch times. And it would continue after school: every afternoon, sometimes with our uniforms still intact, we'd all congregate at C2DAO's crib ­- he was the leader of the pack, the equivalent of Wiley to Roll Deep - where grime sets would run until the early hours of the morning. I just used to sit there and listen to the "noise."

I hated grime. It was weird to me; the fast-paced productions, the angry lyrics. Mad strange. I'm not ashamed to say it: I'm a mumma's boy, at heart. Yes, I grew up in a rough part of London, but I never experienced that "black boy anger" I heard in the lyrics. I mean, I was never going to - was I? Until I stepped away from my sheltered past and encountered the real world.

One Saturday night, me and the rest of the crew had planned to head over to Northampton town for an over 18s rave. I was 16. We knew the promoter at Club Teeze, so was able to get in without a check, but I didn't know it was going to be a grime event. I still detested grime, at this point. On the bill were Wiley, D Double E, Flirta D, Desperado, DJ Cameo and a whole host of other spitters my friends were inspired by. It was like a mini Eskimo Dance, come to think of it. As each emcee passed the mic over Creeper, Pulse X and other pounding riddims, it was like I was being taken over by the spirit; a similar feeling to that of catching the Holy one. Gun fingers were thrown profusely, with a scrunched-up boat and Crazy Titch bounce in my skank.


The energy in the room was electric and nothing I had ever experienced before. It sounds a bit nuts to say, but this was a life-changing experience for me; I was never the same after that night. The change was so drastic, that I stopped listening to American music full stop because it didn't speak to me. And, to some degree, it still doesn't.


Two years after that event took place, I saved up my pennies and decided to throw my own party. A grime party. I called it ChockABlock and booked-out the Caribbean Social Club in Northampton to hold it in.


It was a small, dingy venue, holding around 250 people or so, but with Skepta, Tinchy Stryder, and Logan Sama on the line-up, it was easy to fill. Since then, I've become something of a grime missionary, putting on raves in the capital and writing about it for a range of publications. But this young black boy "from the bits"—who got an E in his English GCSEs—was never meant to be a music journalist. Journalism isn't something I grew up wanting to do, and it certainly wasn't the norm for someone like me to be a journo. I never studied the craft in higher education, I just blogged about grime on my blog for fun. But then, things got kinda serious. I honed my skills and worked my way up to be in blessed Music Editor positions; first at MTV, and now at Complex Magazine.

So I owe a lot to grime: my career, my sanity (there's nothing more uplifting than a classic Sidewinder set). And as the scene grew, so did I, as a person. For me, grime has always been more than just a style of music. In the wise words of Skepta on his celebratory Shutdown single: "This ain't a culture, it's my religion."