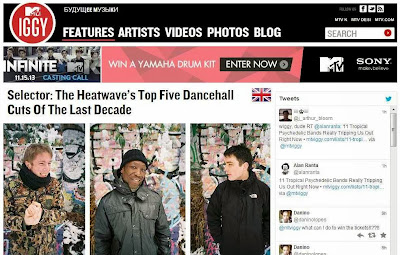 It’s official: The Heatwave are champions of the UK dancehall. Gabriel Heatwave, Rubi Dan, and Benjamin D held their first ever bashment party in east London back in 2003, and for the last ten years they’ve catered to long-time nurturers of the sound, as well as eyebrow-raising trendy types, with their regular Hot Wuk club nights and mixes. That along with radio shows on Rinse FM, BBC Radio 1Xtra, and tours in Australia, Brazil, Canada, and the States are just the tip of the iceberg of what the trio’s contributed to the Jamaican genre. To celebrate their decade-long career in dancehall, The Heatwave will be doing a mini tour of the UK. And for those of you unable to catch the guys live in action, fair not; Gabriel Heatwave has carefully selected five bangers from the last ten years, which have "provoked scandalous wining, huge singalongs, and endless joy on the dancefloor," for you to bruk out at home to.