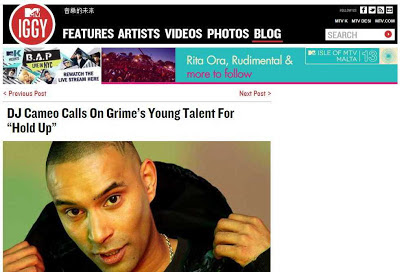 DJ Cameo has earned his stripes over the years for being one of the leading promoters of British underground music. His popular BBC Radio 1Xtra show has helped break many-a-producer and MC, and his uncontrollable excitement for the music is evident every single time he gets on the mic to present the two-hour weekly slot. Not content with ruling the airwaves, Cameo is looking to take over the producing game too. His new release, Hold Up, features five of the best young grime talents around, who all get busy on his "FGM" (future grime music) beat. Join Maxsta, Kozzie, Dot Rotten, Scrufizzer and Nasa for a masterclass in wordplay and braggadocio…