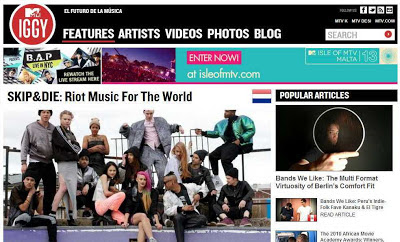 Where They’re From: The world

For Fans Of: M.I.A., Hiatus Kaiyote

Sounds Like: "A kaleidoscopic party on a thin line between life and death."

South Africa’s Cata.Pirata and Amsterdam’s Jori Collignon are the leading forces behind SKIP&DIE, a collective of creative minds whose purpose is to bring change through their music. Born to two social activist filmmakers, Cata.Pirata’s songwriting tends to tackle social issues and the struggle, rather than love and happiness, and it’s Collingnon’s tropical, ghettotech, dub, and hip-hop-infused beats that bring SKIP&DIE’s identity together without crises.

Just before the making of the duo’s debut album, Riots In The Jungle, Cata.Pirata took to her hometown in search of some new blood to feature on it, which included rappers, rockers, and everything else in between. The end result? A work of experimental greatness, heavily loaded with enough substance to lead/cause a riot.