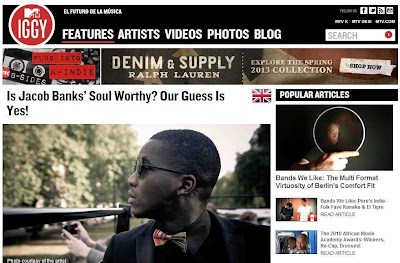 Where He’s From: Birmingham, England

For Fans Of: Daley, Josh Osho

The UK has a new soul brotherhood, and 21-year-old Jacob Banks is one of its core members. Born and raised in Birmingham, it was only twelve months ago that the reformed street kid discovered his musical talent: singing, songwriting, guitar-playing – the lot. "All of the sounds that I come up with and the songs that I put out are individual to me, and I tend to find new ways to tell old stories," says Banks. "I have a soulful voice, but I want to use it in a really fresh and modern way."

For someone who has only been singing for a year, the currently unsigned act’s voice is mature beyond his years. And his husky tone – which is almost reminiscent of an old, cigarette-loving blues singer – and convincing stories about life’s hardships has made an unlikely connection with the UK’s trap-happy-rap-loving audience. Kids On The Corner helped Banks crawl into the music industry, but it was his highly-praised EP, The Monologue, that helped him stand up strong next to the best of them. With a support slot on Emeli Sandé’s forthcoming tour, things are looking promising for the up-and-comer.

Jacob Banks remains humble, and focused on the future. "I’ve been writing and recording a lot and I cannot wait to put out some new material," he says. "I’ve been lucky enough to spend some time with Bondax, Chase & Status and artists who are really flying the flag for their genre. I like learning and understanding from other artists, and seeing what makes them tick and makes them creative. Generally, my aim for the rest of this year is to remain happy and continue to learn."