MTV IGGY: CRIM3S Has Tunes So Addictive It Should Be Illegal 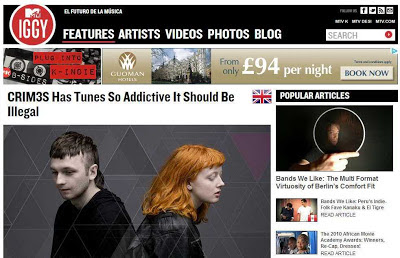 Where They’re From: London, England

Sadie and Isaac make up CRIM3S, a grunge rave duo who first we met each other whilst living in a north London warehouse called The Monkey Farm. Life was peaceful, but that all changed when they were given a 24-hour eviction notice one day. The couple were homeless for twelve months following the boot, committing daily crimes to survive: shoplifting for food and the likes. And although they struggled, the experience has added much to their delivery of music. "Being chased by police and opening buildings to squat is a funny way to live," says Isaac. "The harsh reality of life – not just for us, but the people we see around us every day – is what our music is about, and the reason why we're called CRIM3S."

Thanks to a few of their friends, Issac and Sadie eventually started doing DJ sets at raves in east London, which gave them a few extra bucks to fund their chillingly dark, both lyrically and production-wise, music movement. Sadie brings the shouty vocals, while Isaac gets lo-fi, distorted, and down right devilish with the beats. There's a 'fuck-the-world' message in most of their songs, too, which is always nice to hear when you've had a shit day at the 9-5.

"We've had so much shit being wrote about us recently saying that we’re trying to sound like other bands, and it's fucking soul-destroying," says Sadie. "Our sound is the rawest form of emotion, and we don't aim to sound like anyone else." You can form your own opinion on CRIM3S' music when they release their new EP, Stay Ugly, on digital and vinyl later this month.