MTV IGGY: The Child Of Lov Lets The Funk Out 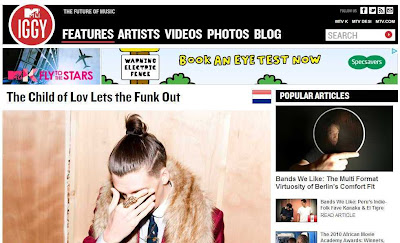 Name: The Child Of Lov

Where He’s From: Amsterdam

Sounds Like: When pop got its groove back (forget Stella).

Fancy a bit of modern-day psych-funk? If so, then The Child Of Lov has got you fully covered. Up until only recently, all we knew of the singer from Amsterdam were the ear-grabbing songs and creative visuals uploaded to his YouTube channel, but there was a reason for his mysterious ways. "I wanted to let the funk out," says The Child Of Lov. "Way too much stuff is face-over-substance nowadays so, with the first few songs to hit the net, I thought it would be refreshing to let the tunes speak for themselves first."

Stevie Wonder and The Beatles, D’Angelo and Erykah Badu, these artists have all helped point TCOL in the right musical direction – which is obvious, after hearing the way he works his soulful, raspy, high-pitched voice. Born Cole Williams, it would seem the 26-year-old has become somewhat of an overnight success. His first few tracks, Rotisserie, Heal and Give Me, were heavily supported by your favourite blogger’s favourite blog, and he even went on to win a prestigious NME Radar Award for his singing, songwriting and producing skills a couple of months back.

Currently signed to Double Six/Domino Records, The Child Of Lov is preparing to release his self-titled debut album on May 6, with everyone from Damon Albarn to DOOM set to make an appearance. "I didn’t go in with a preconceived idea of how my album should sound," he explains. "It’s just the type of music that I want to listen to myself, that’s why I made it." And what does the next few months/years hold for the soon-to-be star? Well, he doesn’t like to think that far ahead: “I have no plans for the future, because this is the future! I just take life as it comes, day-by-day…"