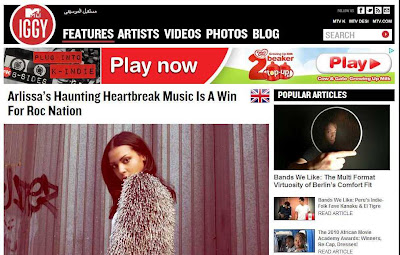 Where She’s From: London, England

Beyoncé, Rihanna and Rita Ora will soon have to make plenty of room under Jay-Z’s Roc Nation umbrella for new signing, Arlissa – who is already giving them competition in the looks and vocal ability stakes. The 20-year-old south Londoner got her start in the music biz last year, when she was flown out to Los Angeles by the legendary Nas soon after he was shown her demo. After the Brooklyn-bred rap star jumped on the demo and helped the singer of German and American descent transform it into the well-received Hard To Love Somebody break-up song, her life changed forever.

Down-to-earth and understated, that’s Arlissa all over – which is far cry from the current crop of pop/R&B divas – but please don’t get it twisted, because there’s a powerful voice under that humble demeanor of hers. Her vocal styling is eerie and hauntingly beautiful, which has led many to compare her to Florence Welch. For Arlissa, it’s a comparison she is honoured to have. "I honestly love being compared to her [Florence Welch]," she says. "I’m not trying to sound like her, though, but it’s incredibly flattering. I think we’re very different singers, and our sounds aren’t actually that similar. But yeah, I’m a really big fan."

Showing that she can be versatile, Arlissa will be featuring alongside grime’s dubstep-loving MC, P Money, on the forthcoming Wilkinson single, Heartbeart. And with new-found fans around the globe, the BBC Sound Of 2013 nominee’s journey will be an interesting one to follow as the months go by. "I’ve got an amazing team behind me, and I feel incredibly lucky to be part of the Roc Nation family," says Arlissa. "Ultimately, I think the music is good enough – which is what it comes down to. I really hope people like what I have to offer."