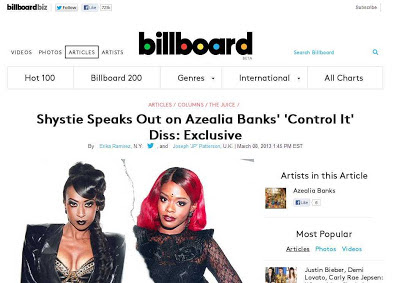 Twenty-four hours after Shystie premiered the video for her and Azealia Banks' latest collaboration, Control It, exclusively on The Juice on March 3, the London-born rapper found herself in turmoil with Banks and her team. Shystie and her management received a notice from Banks' management and label, Universal Music Group's Interscope Geffen A&M, insisting they take down the video. Control It was ultimately taken down per Universal's request and, according to Shystie's team, went against their original agreement.

Azealia Banks took to Twitter to say that the video was "bogus" and "so unoriginal, so not Azealia," which left Shystie speechless - until now. Shystie penned a letter to the The Juice, giving her account of what happened. Read below:

"Hi readers of The Juice,

Thanks for giving me the chance to give my account of this situation.

So, first of all, anything that comes out of the mouth of that girl [Azealia Banks] is total bulls--t. The video was shot last October 2012, with full approval from Banks and her management. The video was personally funded by my manager based on the green light given by her team. It wasn’t until two weeks after the shoot that her manager sent an email asking if we had approval from her label. This was crazy to us, as they had both given us clearance to shoot in the first place. As far as I was concerned, it was all cool and everything was getting dealt with between us, that’s how we handled the 'Neptune' video. She [Azelia Banks] liked to give off this impression that she was calling all the shots.

We contacted Universal and worked out a mutual agreement based on it being a swap for services, as I featured on 'Neptune' and done her video in N.Y. The video was finally edited by late December 2012, my release plan was set and we were asked to send it to Universal for approval. They said that it was fine, but needed approval from management. This was going on for about a month, which was holding up my campaign. When they finally replied (mid-Feb 2013), a guy that we'd never been introduced to emailed us, saying: 'It’s fine, but they need to work out the date.' We, once again, told them the date of release, and he replied: 'I believe Azealia wants it to come out after her video.' He was talking about a video which she hadn’t even shot yet, and one they had no date for.

The alleged manager was some guy who works with Will.i.am, and his attitude was shit and unprofessional. They had no respect for my schedule, or the fact that it's my video and she's just a feature. To be honest, it shocked me that the management were so flakey and used her name as the reason I had to wait. It just made us think, 'Why the hell are we dealing with you for if Azealia’s calling all the shots?' It’s like we just went full circle. There was no response in terms of, 'Will it be okay if we can drop our video on a different date?' We definitely didn’t get an email explaining that they weren’t happy with the video.

The video dropped on the date we had specified, and then within 24 hours, we had Azealia and her managers sending disrespectful messages and her label sending litigation threats. If they told us, at any point, that they didn't like the video, we would have accommodated the changes – especially as they viewed it months ago.

It was actually upsetting to me, as I've done so much for her and her family outside of music. I've lent her money, sorted out her hair, took her team out clubbing, etc. We were all cool, like family. She told me that I was one of the best female artists out, and I felt she generally wanted to build a working relationship. I think the fame and pressure forces her to do stupid things, starting all these dumb publicity stunts.

At the end of the day, the video and song is owned by us and nobody can stop us from putting it about. If people don't want to support it because they're scared of the major labels, then fine, but I know there are tons of real people who will, as I’m an independent artist working hard. What I’ve learned from this experience is to not do business with fake people. The video for 'Control' it is on the loose and cannot be tamed! I've also made a small change to her verse on the EP ['Pink Mist'], which you'll be able to hear soon."

This also appeared over at Billboard: H E R E