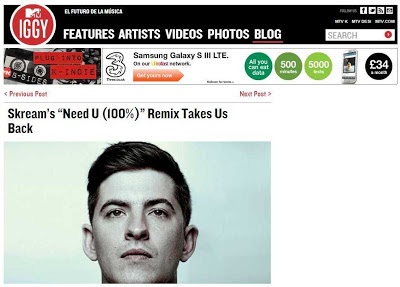 In 2012, Skream shook up the dance music industry when he revealed plans to break away from dubstep to release a disco record. "Why disco? Well, I'm just a huge disco fan, and I've always wanted to make a proper disco record," the star from Croydon told Village Voice recently. "I've been trying for years to do it but I've now managed to pull it off and have it sound authentic, like the musicality of it: the chords, and shit like that," he added. "Disco is very hard to make, because it's all about the vibe and it's so hard to replicate them vibes, but I've always wanted to say that I've been able to make a disco record."

To prepare fans and critics for his disco release this year, Skream has unveiled his remix of Duke Dumont and A*M*E’s Need U (100%). The original already has a disco edge to it, but the bulk of it is run by bass – much like the type of house currently being birthed out of the UK's underground house scene. However, Mr. Oliver Jones puts the heavy bass to one side, and takes it all the way to the '80s disco dancefloor. Rollerblades? Check! Fake Afro? Check!