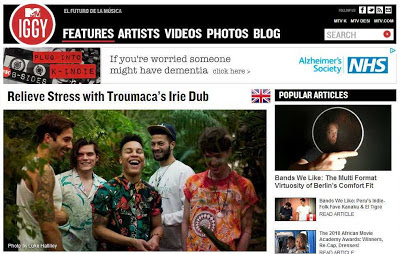 Where They’re From: Birmingham, England

Most Similar: The xx, Friendly Fires

UK grime, dubstep and Caribbean gospel, Aaliyah, Timbaland and UB40, these sounds and artists have heavily influenced and inspired Troumaca – a five-piece indie outfit from Birmingham, England – to create their "sun-drenched tropical blissdom" sound. You know when you’ve had a hard and stressful day at work, and you need some uplifting, happy music to switch your mood? Well, you’ll have an instant smile on your face after listening to the first thirty seconds of any Troumaca tune.

In December 2012, the band was signed by Gilles Peterson – who, if you don’t know, is one of the UK’s go-to broadcasters and DJs for new music – to his record label, Brownswood Recordings. But even before they caught Peterson’s attention, Troumaca had already been causing a stir in the Midlands (where they’re from) with their DIY-style videos and Gems EP, which put them firmly on the 'unsigned bands you should know' map.

Their new Virgin Islands EP, which is out in February 2013, has enough tropical vibes to make you feel as though you’re on a beach in the sunny town of Troumaca, St. Vincent.