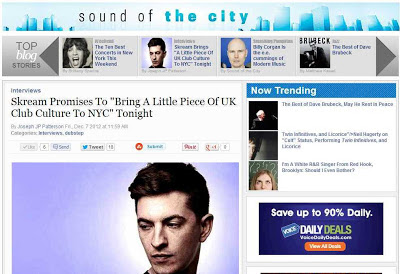 
Skream's forward-thinking has turned him from a bedroom beat-maker into a super-producer within the Brit-pop arena, but it hasn't happened overnight. After spending ten years helping to build one of the most influential sounds to come out of Great Britain, Skream has earned every right to be the face and authoritative figure of dubstep music.

Oliver Jones, as the 26-year-old from Croydon was born, unearthed his talent for producing at the age 15 while working at the legendary south London dub-hub, Big Apple Records -- where he also met his Magnetic Man bandmates, Artwork and Benga. After releasing 2005's MC-loved dubstep classic, Midnight Request Line, Skream instantly became an underground music star, and he has remained at the top of the bass culture ladder ever since.

We spoke with Mr Jones about his career highlights, the mainstreaming of dubstep, and what he really thinks of Skrillex, all before his show tonight at Webster Hall.

What have been the highlights of your career so far? I'm sure there are many for someone who's a decade deep in the game, like yourself...

I guess a couple of things, really. Getting a gold disc for the La Roux remix has got to be up there, as well as having a top five album with Magnetic Man. Those two are definitely career highlights. I tell you what, my Skreamism gig at the Electric Brixton the other day, which sold out, was great. It might not seem like a big deal, but it was quite a personal thing to see my name on it and having everything go to plan. It was amazing, like, next level.

I heard the night was a big success, so well done on that. You've played a major role in helping dubstep get to the mainstream level that it's currently at. Do you feel it's gone the right way, though? Like, what are your thoughts on artists like Britney Spears and Taylor Swift using dubstep in their records?

We started doing this 10 years ago and nobody would listen to it, nobody would buy it. In my honest opinion, the fact that it's gone that far and some of the biggest artists in the world are using dubstep on their records, I think it's a good thing. I know you get people who moan about it, but for somebody who's been there before dubstep was dubstep, it's a huge thing. We created something, and it's gone beyond the boundaries, it's gone over to America and now it's one of the lead genres in the country so, personally, I don't feel bad about it. It's not something that pisses me off; it's just another one of the crazy things that has happened in the last decade.

Skrillex is a big fan of yours, and always shows love to you in interviews. Are you proud of what he has achieved for the London-born genre in the States and beyond?

Skrillex is a good mate of mine, I think he's sick! The thing is, he's massive and it's not for no reason. He's extremely talented, and what he's done is sick. He's opened dubstep up to a whole new white America and it's crazy now. Skrillex has taken what we started and turned it into something else. I'm a huge fan, so huge respect to him.

Can we look forward to hearing Skream and Skrillex on the same tune soon, then?

It would be great! People wouldn't stop talking about it [laughs]. Realistically, with how busy he is and with the things I've got going on over here, it's probably not gonna happen for now. It could happen one day, it's not ruled out, but that fucker's got a crazy schedule, you know what I mean? [Laughs] He's doing next things, he's working for Disney or something at the minute, but it could definitely happen.

You recently worked with Kelis on your new track, Copycat -- which everyone seems to be loving at the moment -- but who would you like to get in your production lab next?

I'd love to do something with The Weeknd. I was talking with him a little while ago about doing something, but it's another one of those things where we've both got hectic schedules. The next person I'm going to be working with is Miles Kane, and I was out with one of the Klaxons last night and it looks like I'm going to be doing something with them. I'm just working a lot as a producer at the moment.

You and The Weeknd... Yeah, that needs to happen. So, what's happening with Magnetic Man? When can fans expect some new music from you, Benga and Artwork?

We're working on a new record, and we've got a couple of the singles to play in the new sets. We're just working on having the album ready for next summer, really.

Speaking of Benga, you guys recently moved your radio show from Rinse FM, which is adored by the underground, to BBC Radio 1, which appeals to a more mainstream audience. How has that transition been for the both of you, and do you miss the raw Rinse vibe?

I did a one off special show the other night for Rinse, actually. You know what? It's a totally different thing. You have to do so much prep for the shows on Radio 1, and I miss being able to say certain things and not worry about it. I prefer the professionalism of Radio 1, though. It's a whole different organization. You put a lot of work into each show every week. I spend a whole day getting the music ready for each show, whereas Rinse is great to do things on the fly. So yeah, I do miss it -- not so much for me to leave Radio 1, though [laughs]. If that show does come to an end, and I've missed Rinse enough, then I'd definitely go back.

From the Midnight Request Line days to now, how do you feel you've grown as a producer?

I don't know [laughs]. It's grown like I've grown, I suppose. I've been doing it for so long...It's really hard to explain. I feel like my music's on a more professional level now, whereas years ago -- even with Midnight Request Line -- it didn't sound as big as my tunes sound now. I mean as in the dynamics, not as in status big, but production big.

I hear you're turning your hand to disco! Out of all the dance music genres, why disco?

I've done the disco record already, and it'll be coming out next year. It's a collaboration with Sam Frank, and it's just sick! I rarely say that about my music, but the tune is sick [laughs]. Why disco? Well, I'm just a huge disco fan, and I've always wanted to make a proper disco record -- not sampling a record, but actually make a disco record. I've been trying for years to do it but I've now managed to pull it off and have it sound authentic, like the musicality of it: the chords, and shit like that. Disco is very hard to make, because it's all about the vibe and it's so hard to replicate them vibes, but I've always wanted to say that I've been able to make a disco record.

I can't wait to hear it! Although house has been around for decades, it seems to be all the rage in the UK's underground music scene of late. Ravers who you'd usually find throwing up gun fingers at grime and UK funky club nights are now cutting shapes to tech house and nu-disco. Do you think things are going to move that way more as time goes by?

It's just the cycle, man. Everything comes back around every few years. Garage is back now, and it was gone for at least 10 years. It happens with everything. House music is a universal musical language, so it's a good thing. People are listening to really good music at the moment. Good music seems to be the trend, rather than a certain type of music being the trend. People are a lot more open to what they listen to. When I was at school, you either listened to grime or nothing [laughs]. I think it's good for everyone now. Good for the kids [laughs]. Not to sound too cliché, but it's uniting people.

It definitely is. You're actually going to be doing some uniting of your own when you headline New York's Webster Hall tonight. What kind of set can people look forward to experiencing?

I'm going to bring the element of Skreamism! What I've been doing for the Skreamism sets includes everything: my old productions, my new productions, house, techno, rave, dubstep and club classics, just a good party vibe. The whole Skreamism thing has been about partying, not stood there bobbing your head, it's about raving. I'm gonna bring a little piece of UK club culture to NYC.

And lastly, what do you have planned on the releases front? I can sense a new Skream album on the horizon...

Skreamism 7 is the next release, which is out this month, and it'll have the Copycat track and five other tunes on it. The Skreamism's aren't really mini albums, they're more like a snapshot of what I've been doing in the clubs the year previous. It's got a house track on there called Sticky and a couple of deeper, original dubstep-sounding tunes. I'm not planning to release an album for now. I might start thinking about writing one next summer, though. I released two albums in 2010 and it kind of put me off writing albums for a little bit. I'll know when the time is right to do another album. I don't think the world's screaming out for a new album at the minute, excuse the pun [laughs]. I don't want to write a single for an album, I just want to get back to making music again, in any form. It's just like, why can't a tune be great on its own? Why does it have to be great on an album? I wanna keep on writing tunes and get back in the mode of finishing tunes.