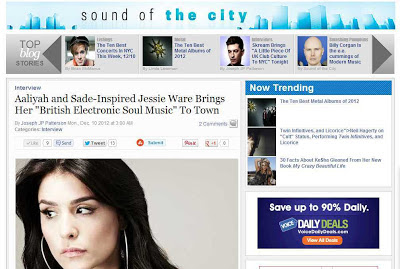 British soul has a new leading lady: Jessie Ware. Her deep-rooted love for '90s R&B has played a major part in shaping her elegant sound, while a strong appreciation for British bass music has enabled her to put a different spin on things. Ware's debut LP, Devotion, entered the UK album chart at a highly respectable No. 5, something which the humble star from Brixton, south London, did not expect. With her single releases already being cult favorites--the remixes to boot--Jessie Ware, 28, is getting closer to legendary status territory, daily. In the run-up to the January 15 release of her special edition EP, If You're Never Gonna Move, the soulstress will be headlining a few gigs around the country--starting tonight at The Box in NYC. Here's a preview of what's to come from the "electronic soul" musician.

Congratulations on all of your success so far, Jessie. How has the year been for you?

Thank you! Yeah, it's gone so quickly that I'm just starting to let it sink in and appreciate what's going on, it's brilliant. I'm just really happy about the people who have been involved in this, from the music to artwork to style -- everything. It feels like we're all celebrating this now, which is really nice.

Before music, you were interning to become a journalist at the Jewish Chronicle, right? Tell me about the transition from wanting to write for people, to wanting to sing for them instead...

I just got lucky, to be honest. My best mate asked me to be his backing singer for a BBC Radio 1 session, so I took my day of holiday and did that. But I wasn't at the Jewish Chronicle at that point, I was at a TV production company because I thought that I wanted to make documentaries [laughs]. So I took my holiday, went and did backing singing and never looked back. I kept on getting asked back. I got very lucky.

You've come a very long way since featuring on SBTRKT's 2010 single, Nervous. What has been your most cherished moment up until now?

I think it has to be playing at the Electric Brixton. It felt really different and really wonderful to sing for people who had bought tickets to see solely me. We'd gone through the year playing festivals, which had been really good training and fun working hard and trying to win over a crowd, but it just felt brilliant to be playing to a thousand people who had come to see me. Everyone was willing me to do well and I kind of felt like a bit of a pop star [laughs].

You released your debut album, Devotion, in the UK and surrounding countries to critical acclaim. How did it feel knowing that your first LP was being praised by all of the right people in all of the right places?

I didn't really know what I was making when I made it, so for people to like it and for the critics to like it, it's very nice. It's obviously very helpful as well that people wanted to write about it. I honestly didn't expect any of that when I was working out what I wanted to say on the album. It's really cool.

Do you have a favorite track on the album?

I think Running is probably my favorite track. I think it was the last song I wrote and I think it shows that there was no pressure. It was really easy to write and I really felt like, all of a sudden, I was an alright songwriter. I'd struggled and fought with songwriting at the beginning, but Running just came out and I feel very proud of that one.

I love that track, especially the epic Disclosure remix. Many have compared you to the legendary Sade, and even the late Aaliyah. What's your take on that?

I think I kind of invited that by banging on about how much I loved Aaliyah and Sade [laughs]. I think, sometimes, people just need a point of reference to something or someone new for them to make sense of it. I don't feel like I'm half way to Sade or Aaliyah's level, but I love them both and it's cool for people to see some similarities.

Okay, so how would you describe Jessie Ware's sound to an enquiring mind?

It's British, electronic soul music. That's how I would describe it.

Which artists had a strong influence on you in your younger years? I know that you're a big fan of 90s R&B...

Girl groups like TLC, SWV and Destiny's Child, I loved what they were doing and it was really good fun. They didn't take themselves too seriously, they were flirtatious and it was great music. Lauryn Hill, too. I was mad about The Miseducation Of Lauryn Hill album, it was an album that really stuck with me and I'd play it and knew all the words. I used to watch loads of MTV Base when I was younger: Lucy Pearl, Montell Jordan, Jon B, those guys were on all the time. And so much JLo, so much Jennifer Lopez [laughs]. I watched that all the time and pretended that I was in the videos.

What are your thoughts on R&B today, though? It's definitely not what it used to be...

I feel like it's getting there. People like Frank Ocean and Miguel are amazing and exciting new R&B stars, and I really liked Usher's Climax song with Diplo. There's still good R&B music out there. I also like a girl called Rochelle Jordan, she's really cool.

Would you like to work with anyone you've just listed there?

Yeah, most definitely. I'm a bit worried Frank Ocean's going to issue some kind of restraining order on me [laughs]. I just love his vibe. I think Miguel's amazing, he sounds like Marvin Gaye. The-Dream, that song Yamaha he made, I never stop playing it. Oh, and the Weeknd is so cool! The whole crew that he has around him is wicked. His producer, Illangelo, makes some really exciting stuff.

Speaking of producers, you've worked with some of the most innovative bass music producers out there, SBTRKT and Julio Bashmore being just a few of them. Do you have your ear on anyone else right now?

I'd like to work with Disclosure again, because I just think they're great. I think Perseus is really good. He changed Night Light from being this over-the-top ballad to this cute R&B duet between me and my producer using our backing vocals. Also Todd "The God" Edwards, he did a remix for me -- which I'm so, so happy about. I never get to go clubbing anymore [laughs].

You're releasing your If You Never Gonna Move EP just for your fans in America, so what can they expect from it when it's released on Cherrytree Records in January?

There will be a song off the album on there, and then some extras. I just think it's quite a fun way to start the year in America. They can expect a lot of me talking about love and exploring how to make an album -- there's loads of genres in there. I've got so many influences in there, so I've tried to combine them all into a big melting pot and hope it works. There are a few songs you can listen to when you're dancing, too [laughs].

And what kind of show do you have planned for your sold out show at The Box in New York City tonight?

I've heard The Box is quite small and I've heard it's quite a raunchy place. It's got willies everywhere, apparently [laughs]. I'm going to pretend I'm a jazz singer because I like the idea of an intimate venue. I'm not going to sing jazz [laughs], but I guess we'll just continue to do what we've been doing.