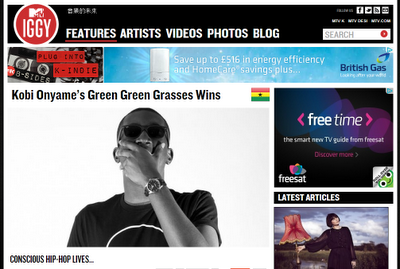 Where He’s From: Ghana via London, now based in Scotland.

There aren’t many conscious rhymers left in the UK. Nowadays, there seems to be more love shown to lyricists who delve into the darker realms of life, rather than looking on the brighter side of it, but that’s okay. Kobi Onyame, however, is different. The Ghanaian-born rapper and producer fuses his life experiences – both good and bad – along with some inspiration bars, which could almost be used as daily quotes. With a penchant for pop, rock, dance and gospel music, Onyame’s overall musical presentation is quite left-field, but he sticks to the original hip-hop format when it comes to his old skool-style delivery.

Kobi Onyame’s debut unsigned album, Green Green Grasses, was released in 2011 and landed on the 29 spot in the iTunes Hip-Hop Chart. Featuring Emeli Sande and Sway, the LP was an impressive effort for someone who had (and still has) no major label backing. With BBC Radio 1 heavily supporting his singles, Protect Myself, Inner City Lights and Dreams – and having gone on tour as a support act for the likes of Nas, Kanye West, Jessie J and Wiley – the Scotland-based artist’s name has now become a regularly mentioned one within UK urban music.

"Heartbeat" is the title of the rapper’s new single, which also appears on his 2011-released album. Produced by Onyame himself, the track features the beautiful, almost AlunaGeorge-like vocals of Atlanta’s rising soul star, Danay Mariney. "I wanted a way to portray my ideas on life," he explains. "The chorus of the song says: 'My heart is on fire, burning through space.' At the end, it says: 'Go, go where my feet can’t go.' Both lines say two completely different things to me. I wanted to portray that in life, we sometimes catch feelings about different situations. Our hearts burn for love, success, etc., and our hearts sometimes burns so much that we don’t want it anymore. But regardless of the pain, we carry on."