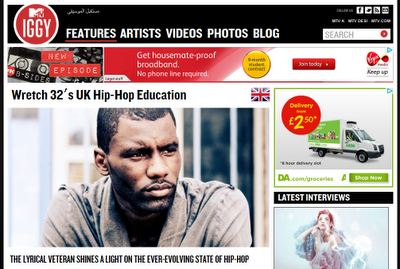 Words and Interview by James Walsh and Joseph ‘JP’ Patterson.

Black & White was, without a doubt, the UK hip-hop album of 2011. It received great reviews across the board, took a place in the top ten album chart, birthed many top ten singles and caused MTV UK to crown Wretch 32 the best MC of 2011. Despite this success, it wasn’t enough to see the “grime-rapper-soul-musician” bring home a MOBO Award or even be nominated for a BRIT Award, to the shock of many. Being recognized by our American cousins over at BET as Best International Act only highlighted the current state of UK hip-hop, and raised the question as to whether it’s getting the acknowledgement and support it deserves on an industry level. MTV Iggy spoke to Wretch 32, who recently gave back to the streets in the form of Wretchercise, to get his take on the growth of the UK hip-hop scene, where it is currently and despite the advancements made over the last few years, what else needs to be done to provide UK urban artists with the exposure their talents warrant.

First things first, congratulations on your BET Award. How did it feel to get that recognition from such a huge US awards show?

Being able to pick up awards in any country that isn’t my own is a massive shock; I didn’t think I’d take it away. Twitter went crazy when it was announced and I was really surprised. It showed me just how far music can travel on its own, globally, and the power of the internet and music combined.

You were criminally overlooked for a BRIT Award nomination. Do you perhaps feel that UK hip-hop still isn’t been given the acknowledgement it deserves on an industry level in its own country?

One million percent! When you look at what happens with our genre, there are so many radio stations out there that will still not take the records we make and play them. I’m an observer and I look at the radio stats and scans, and despite there being so many that won’t play our music; we still end up miraculously having number one hits. Think what could happen if all the pop stations played our music. I’m thankful to those that do play our genre.

You were doing your thing on the underground for some time before you got signed. What were the struggles you encountered when breaking through to the mainstream?

When you’re on the underground, you go through your own artist development. It’s a frustrating time and you’re trying to build your fanbase without any help. The great thing is going through that struggle, because then you’ll know what people like you for and what type of records work. Labels have been giving more opportunities to urban artists and by going through your own development; you can tell them what songs people are getting behind. It helps to burst through the glass ceiling as soon as you’re signed if you’ve already gone through that struggle.

There were some UK hip-hop artists who were criticised for sacrificing their sound, and putting out more pop-sounding tracks when they first got signed and launched by their labels. Was a similar proposition ever put to you?  And is it refreshing that we’re seeing less of this now?

Yeah, there’s a freedom there now that wasn’t there before. I’ve come at a better time. Artists before me had to show that they could sit on radio next to Kylie Minogue and Coldplay; they had a different fight and made it easier for me. Hopefully I make it easier for the next batch of like-minded artists. It’s a generational thing and I haven’t had to fight as much as those before me. People come to rappers for an edgier sound to listen to, and labels understand that now.

Professor Green and Clement Marfo recently spoke out against their labels. How important is having the right team around you, when putting the correct deals in place to help an artist cross over to the mainstream and at the same time remain true to themselves, musically?

Musically, you should always do what feels right. The music you make, you could end up performing for the next 3-4 years and that would bug you if you hated it. The thing with building the right team is that mistakes will happen along the way, but if you go with your heart, you should always be ok. Some decisions may affect the pocket and not be as great financially, but if I’m doing what feels right, then I’m cool to do that. It’s always [on] a learning curve because the success is new to us, it’s early days. I learn from others’ mistakes and others can learn from mine.

How would you describe the current state of UK hip-hop?

I think we’re in a good position. We’ve only showed about 10% of our potential and where we can get to. Although it’s a fight, it’s a fun fight. We’re managing to win with less help. We want the game to accept us, respect us as artists and play our records, regardless of genre. It’s exciting to think what we can achieve if given the same shot as everyone else. Festivals gave our music a shot and I don’t think we’ve let them down. Tinchy Stryder, Chip, and even underground artists like Krept & Konan and Sneakbo are now appearing at festivals and everyone who has been booked has done well. The genre is working.

You mentioned Krept & Konan and Sneakbo, who both appear on your new mixtape, Wretchercise. Who else do you rate coming through from the underground?

I like Yungen. He’s around Krept & Konan and doing his thing. I like Cashtastic, too. He’s young, but he’s trying to have a message and stand for something.

It’s been said that labels will back whatever sells, regardless of genre. Do you think with social media that the streets are the new A&R, and some artists don’t require the backing of a major label?

An artist only needs a label when the time is right. If you build your own fanbase and movement, then you have more arguing points and a leg to stand on in negotiations. Otherwise, the likelihood is that the label will sign one song and it won’t be life-changing. If they come in and you’ve done a lot on your own, then you have more value. I was doing shows and things were happening before I got a deal. If the time is right, a label should be adding to what you’re already doing, not dictating the direction.

Going back to the States, Tinie Tempah’s Written In The Stars was a huge track out there, and Chip’s now signed to T.I.’s Grand Hustle label. What do you think it is about UK hip-hop that US audiences are really responding to now?

They’re finding it different. Over here, before you blow, everyone’s screaming for the attention, making weird records to try and get a shot. It’s organic and fresh, and that’s why people are taking to it because it sounds so new to everyone. Once the light is on, it can affect the way you make music – people may become more strategic and try to write a number one. We weren’t trying to make a hit with “Traktor,” we were just trying to make a good song – it was genuine music with no secret intentions. People over here in the UK have heard that in the music and responded positively to it, and now people in America are doing the same.

Do you have plans to crack the States any time soon?

I definitely want to get out there and fly the flag for the country UK. I want my music to be heard and performed to everyone in the world who has ears. People look to England and America for music, so if you have those two, then you can crack other territories. But there’s no rush, I’m relaxed about it.

And finally, what can we expect from Wretch 32 over the next couple of months?

I’m a handful of tracks away from finishing the second album. A new single may be only a few weeks away, but that’s in the hands of the powers that be. I care about the art form and didn’t want a massive gap. There will be some interesting artists on it now that I’m in a position to help people come through.